The British Grand Prix was marked by costly and embarrassing mistakes: from Kimi Raikkonen's engine failure to the inexcusable gaffe of drivers chatting and laughing during the minute of silence held on the grid. Richard Barnes analyses the errors from the eleventh round of the season

It had been hoped that July, the busiest month of the 2005 F1 calendar with four Grands Prix almost back to back, would help the sport to recover from the Indianapolis debacle and return to a state of relative normality. The British Grand Prix at Silverstone was disrupted even before the weekend had begun, by the news of Thursday's horrific bomb attacks on the London transport system.

The F1 circus is usually adroit at handling disasters and tragedies beyond the scope of its own small and self-centred universe. Which made it all the more incredible, especially in light of the recent Indianapolis events, that the sport should once again shoot itself in the foot.

This time, it wasn't a technological miscalculation nor a publicly political spat between the sport's key role players and regulators. Instead, it was an inexcusable social gaffe. Assembled before the start to observe a minute's silence in honour of the London bombing victims, the drivers (unlike the crowd, who stayed respectfully silent throughout) chatted, joked and shook hands with passers-by.

It is impossible to believe that any of the drivers could be so crass and uncaring. The only plausible explanation is that they had assembled on the grid, waiting for a signal to start the minute of silence, and it never came. Or, at least, not to them. The result was that, at a time when the sport's reputation has already been damaged, the global television audience of millions witnessed the drivers unwittingly chatting and joking among themselves during the most sombre of ceremonies.

Thankfully, it lasted for only one minute, albeit an embarrassing and seemingly interminable minute. Out on the track, the mistakes continued to compound, although racing mistakes and unreliability are an accepted part of the sport. They also, true to F1's perverse nature, come at the time when drivers and teams can least afford them.

It started with Kimi Raikkonen's blown Mercedes engine during Friday practice. For the second time in seven days, the race (at least among the main Championship contenders) was settled before the drivers even went out on their qualifying runs.

Given his ten-spot qualifying penalty for changing the engine, Raikkonen's only hope was that Championship leader Fernando Alonso's Renault would break down, allowing him to close the Championship deficit slightly. That hasn't happened all season, and Sunday would again be no exception.

The glum Finn could at least draw the positive conclusion that his recent engines have been reliable during the race, allowing him to take fourteen points in France and Britain, when it could so easily have been zero. Still, that is cold comfort to Raikkonen. Silverstone was reckoned to be one of McLaren's best circuits. Surrendering yet more points to Alonso was not on the agenda. 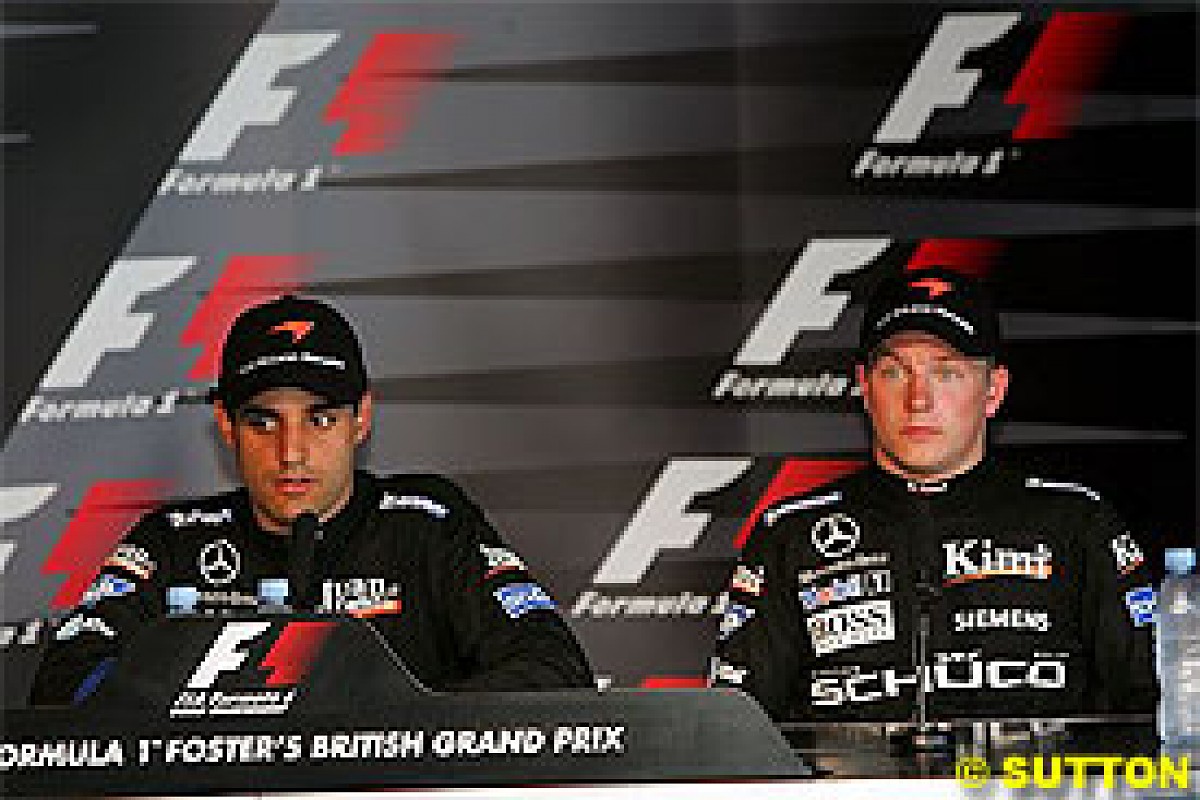 Even worse, from Raikkonen's viewpoint, was the fact that teammate Juan Pablo Montoya claimed the victory. The keenly anticipated battle between McLaren teammates Raikkonen and Montoya has, until now, been the non-event of the season. Montoya's early season shoulder injury, coupled with some disappointing performances and the Colombian's disqualification in Canada, has prevented that rivalry from developing fully. The Silverstone win could provide the motivational spark that Montoya needs to up the ante and continue taking points off Raikkonen for the rest of the season.

Fernando Alonso seemed acutely aware of that possibility, and Renault admitted after the race that their strategy was geared towards defending against Raikkonen, rather than attacking Montoya. For possibly the first time this season, Alonso was driving with the Championship, and not the race, uppermost in his mind. If Alonso could have chosen a driver to be beaten by on Sunday, Montoya would have topped the list. It plays perfectly to the Spaniard's advantage.

Although Alonso himself is not entirely free from concerns about his teammate. During the middle section of Sunday's race, Giancarlo Fisichella had worked himself into a prime position to challenge for Alonso's runner-up spot. A stall at his second pitstop resolved that issue neatly, although the claims that Renault sabotaged Fisichella are nonsensical.

Alonso had track position, and made his final pitstop three laps after Fisichella's. The extra laps on light fuel would have been more than enough to retain track position and second place for Alonso. While it's remarkable that Fisichella continues to suffer such bad luck, especially given the flawless reliability of Alonso's sister car, it seems to be nothing more sinister than the quirks of outrageous mechanical fortune.

Even in teams committed to providing identical machinery for their drivers, there is often an A car and a B car. We saw it with Ferrari in 1990, BAR in 2004, and Renault this year. The A car (Prost, Button, Alonso respectively) runs flawlessly, the B car (Mansell, Sato, Fisichella) keeps breaking.

Kimi Raikkonen will note, with some dismay, that he has drawn the B car at McLaren this season. What makes it worse is that engine manufacturers Ilmor have no ready answers for his recent engine failures. If it was a single faulty component, a technical fix could be incorporated in short order. But Raikkonen has been the victim of two unrelated and freakishly rare engine problems - with no assurance that lightning won't strike for a third successive time at Germany in two weeks. 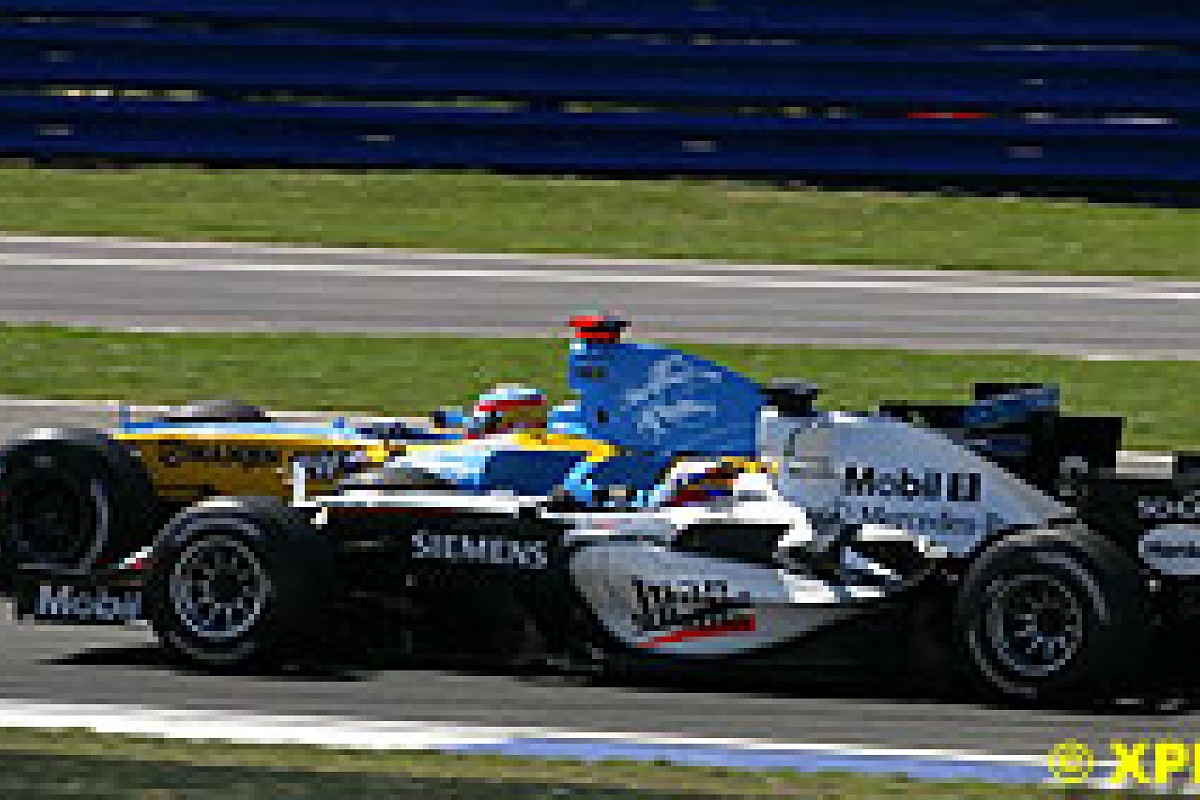 It leaves McLaren in a precarious situation. Despite their bold statements about being the class of the field and the fastest package on the grid, the silver and black pair are only incrementally faster than their Renault rivals. McLaren's dominance in the Thursday and Friday free practice sessions at Silverstone didn't translate to either qualifying or the race. Carrying one lap more fuel than Montoya, Alonso was still able to grab pole position, and the Colombian couldn't shake him during the race. As long as Alonso can occasionally beat at least one McLaren, that is all he will need.

If Raikkonen is to have a realistic chance in the WDC, he needs Montoya to demote Alonso to a habitual third place from now on. With Fisichella's continued bad luck, and the challenge from Ferrari, Toyota, BAR and Williams falling away, that is the best that McLaren can hope for.

It's been a season of compounded errors for McLaren. Silverstone was the watershed, and one suspects that just one more failure on Raikkonen's car will tilt the balance irretrievably in Alonso's favour. Alonso himself is confident that Renault can maintain the development pace until the end of the season. Renault may not even need that much, as long as McLaren continue to blow engines and opportunities.