Yamaha has made a shock announcement that it has suspended Maverick Vinales from this weekend’s MotoGP Austrian Grand Prix.

In a statement issued by Yamaha on Thursday morning ahead of this weekend’s second Red Bull Ring race, it says it has withdrawn Vinales’ entry from the 11th round of the championship.

Yamaha says it has suspended Vinales over “unexplained irregular operation of the motorcycle” during last Sunday’s Styrian GP, in which Vinales finished in the pitlane owing to what he claimed were numerous electronics issues which were giving him a “pitlane” message on his dashboard.

Yamaha says it’s decision is based on analysis of data and concluded Vinales’ actions could have “potentially caused” engine damage, which in turn could have created serious risk to himself and to those around him.

He will not be replaced this weekend and his participation in other races is subject to further discussions in the team.

A statement from the team read: “Yamaha regrets to announce that Maverick Vinales‘ entry to this weekend‘s Austrian MotoGP event has been withdrawn by the Monster Energy Yamaha MotoGP team.

“The absence follows the suspension of the rider by Yamaha due to the unexplained irregular operation of the motorcycle by the rider during last weekend‘s Styria MotoGP race.

“Yamaha‘s decision follows an in-depth analysis of telemetry and data over the last days.

“Yamaha‘s conclusion is that the rider‘s actions could have potentially caused significant damage to the engine of his YZR-M1 bike which could have caused serious risks to the rider himself and possibly posed a danger to all other riders in the MotoGP race.

“The rider will not be replaced at the Austrian GP.

“Decisions regarding the future races will be taken after a more detailed analysis of the situation and further discussions between Yamaha and the rider.” 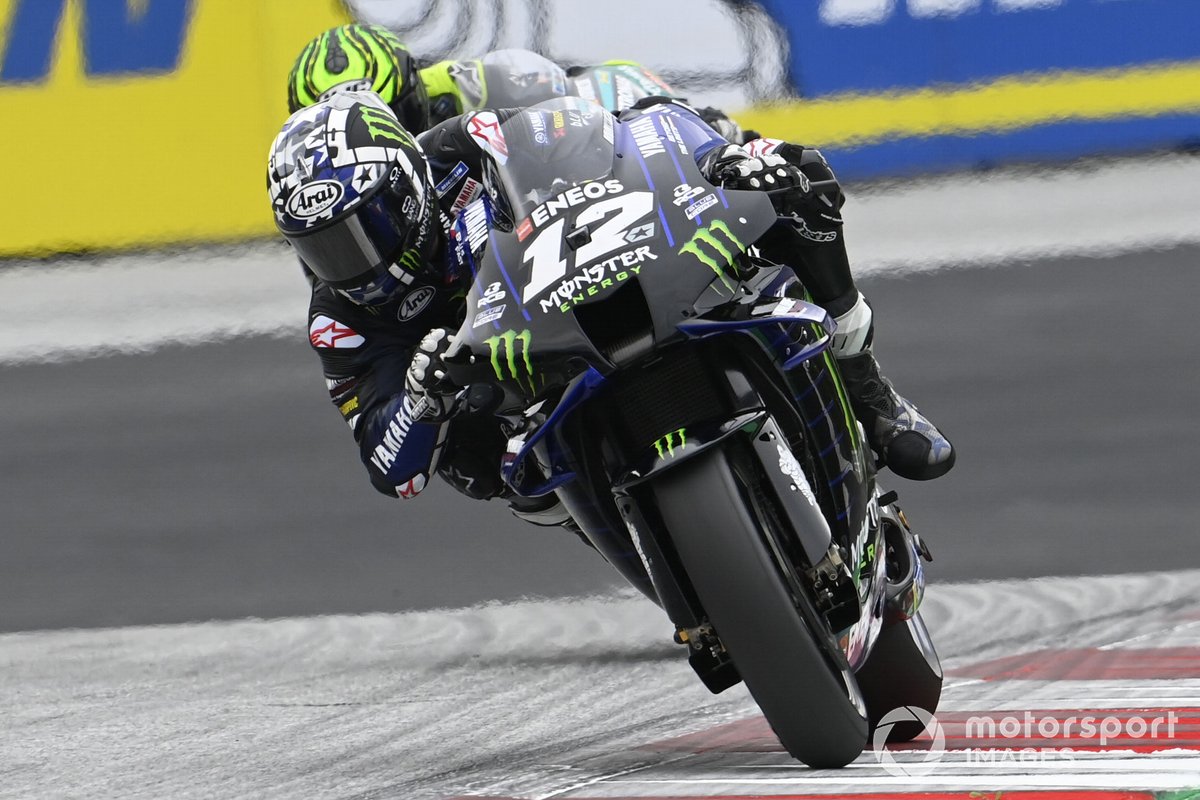 This is just the latest chapter in the ever-souring relationship between Yamaha and Vinales, which has deteriorated beyond repair across the 2021 season.

After a convincing win in the Qatar GP, Vinales has struggled for form on his factory M1 and has only scored one other podium so far this season – finishing second at Assen just a week after he was stone last in the German GP.

After the German GP it wasn’t clear whether Vinales would actually race in the following week’s Dutch TT, with Yamaha thought to have put test rider Cal Crutchlow on standby for Assen – making him unavailable at Petronas SRT to fill in for the injured Franco Morbidelli.

Crutchlow offered a different version of events last weekend, claiming he didn’t race at Assen because he was due to test in Japan.

Yamaha announced on the Monday after the Dutch TT that it had agreed to release Vinales – upon his request – from the final year of his current contract with the team, which was due to expire at the end of 2022.

He is thought to be taking up a seat at Aprilia, though nothing is yet confirmed.

Vinales made a strong start to last weekend’s Styrian GP before it was red-flagged, with his race unravelling at the restart.

He stalled his M1 on the grid and had to start from pitlane, and struggled all race, eventually finishing through the pitlane due to what he claimed were electrical problems.

Vinales stated after the race that Yamaha changed the clutch on his M1, which was a normal procedure after some problems in 2020, and the feeling on his bike completely changed.

Vinales didn’t say anything similar, but did suggest to Spanish press last Sunday that his relationship with Yamaha management is bad.

“Let's see, it's not uncomfortable,” Vinales said of the team dynamic.

“Sometimes it doesn't come out anymore, but nothing happens, it is what it is.

“We must keep pushing and hopefully by the end of the year we will have the opportunity to have the bike that I had this Sunday in the first outing.”

Since joining Yamaha in 2017, following a strong first half to the campaign, Vinales has repeatedly struggled with numerous problems on the M1 – a lack of rear grip, lack of front feeling, poor feeling in the early stages of races on full fuel and bad starts.

Yamaha has made numerous changes to the personnel in the team over the years to try and help him, most significantly ousting ex-Jorge Lorenzo crew chief Ramon Forcada in favour of Vinales’ ex-Moto3 crew chief Esteban Garcia in 2019.

At Barcelona this year, Garcia was swapped out for ex-Valentino Rossi crew chief Silvano Galbusera – though it’s thought this only worsened tensions between management and Vinales.