Rossi ended up just 0.084s slower than Marc Marquez's pole position time, but he downplayed his race chances because of concerns about tyre life.

"Today was a bit of a surprise, but with the pace tomorrow I think that the maximum is, if everything is fantastic, we can fight for the podium," said Rossi when asked if he could re-ignite his world championship hopes in Sunday's race.

"But maybe for the last spot [third], so it's difficult for the championship but it is better to think to the race.

Rossi was in contention for pole position on the first three sectors of his lap at Silverstone, but he lost time in the final sector.

He put this down to excess wheelspin, which is playing a part in the tyre problems he expects to encounter in the race.

"I always suffer in sector four because it is a place where our problem is quite big, we spin a lot [the wheels] and it is difficult to bring the right speed," said Rossi.

"Sincerely, it was a bit of a surprise because I was a little bit in trouble.

"Now we have to try to understand if we are able to improve, to make it better especially for the tyre life.

"Because like it happened a lot of times this year at the beginning we are not so bad, but after we suffer a lot with the degradation.

"So tomorrow, it will be very hard in the second part of the race.

"I hope to make a step to be competitive for the podium."

LCR Honda rider Cal Crutchlow believes he could have beaten Rossi and challenged Marquez for pole position by breaking the two-minute barrier if he had not made small errors in the third sector of the lap. 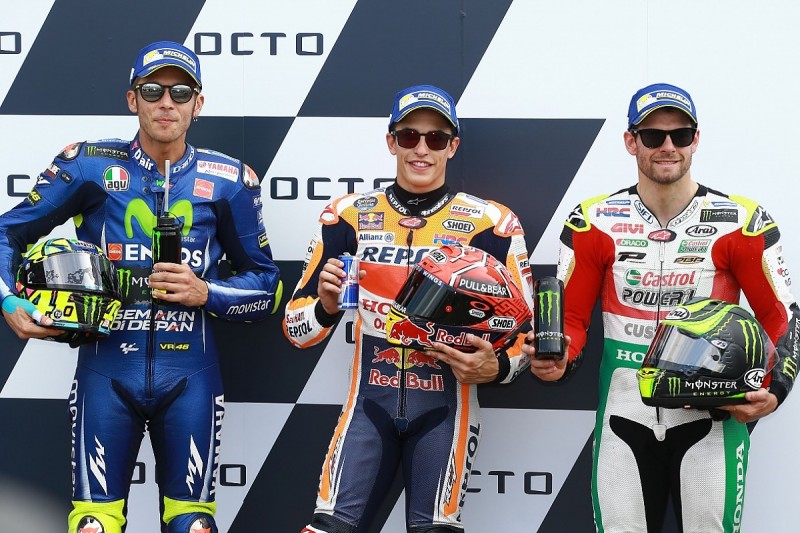 Marquez was the only drive to dip into the 1m59s bracket, but after setting the pace during free practice Crutchlow was confident of doing so.

"I'm disappointed," said Crutchlow. "I woke up this morning and I wanted to go under two minutes and Marc was the only guy to do it.

"I said yesterday that surely we will be in the 59s in qualifying, or the pole position will be in 59s, and I felt I could do it.

"But I made completely my own mistakes in sector three and lost quite a lot of time."

Unlike Rossi, Crutchlow is more upbeat about his chances of battling for victory among the frontrunners after finishing second to Maverick Vinales in last year's race.

"When I saw Marc flying through the air yesterday and then I heard Vale had some stomach problems, I was hoping that they woke up in worse shape than they did today," joked Crutchlow.

"But it didn't happen and they beat me to pole, so now I am looking forward to a good race tomorrow.