Pedrosa announced on Thursday that he would retire from grand prix racing at the end of the season, having lost his factory Honda ride to Jorge Lorenzo.

Since his arrival in 2006, Pedrosa has won 31 MotoGP races, a record that left him joint-eighth with four-time 500cc champion Eddie Lawson in the ranking of all-time premier-class race winners.

But a MotoGP title has eluded Pedrosa, who was runner-up in three separate campaigns.

As he is currently only 12th in this year's standings, he is all but guaranteed to leave the category without a riders' championship.

"It's a great shame, I think, for MotoGP because our sport loses one of the best riders in the last years, in the last period," seven-time MotoGP champion Rossi said of Pedrosa's decision.

"It's also a great shame that Dani never won a world championship in MotoGP, I think he deserved minimum one.

"It's also quite early but this choice is very personal. I didn't expect it, I thought that he would continue, maybe with Yamaha, but he changed his idea I think, he thought a lot.

"It's a great shame for everybody."

Rossi said Pedrosa's riding style of straightening out the bike quickly from a lean angle when accelerating out of a corner had become influential in MotoGP.

"It is good to follow and try to understand, he's always very clean in braking, tries to not slide a lot - and was also one of the first ones to pick up the bike in acceleration very early.

"I think [this] is one of the particularities of his riding style." 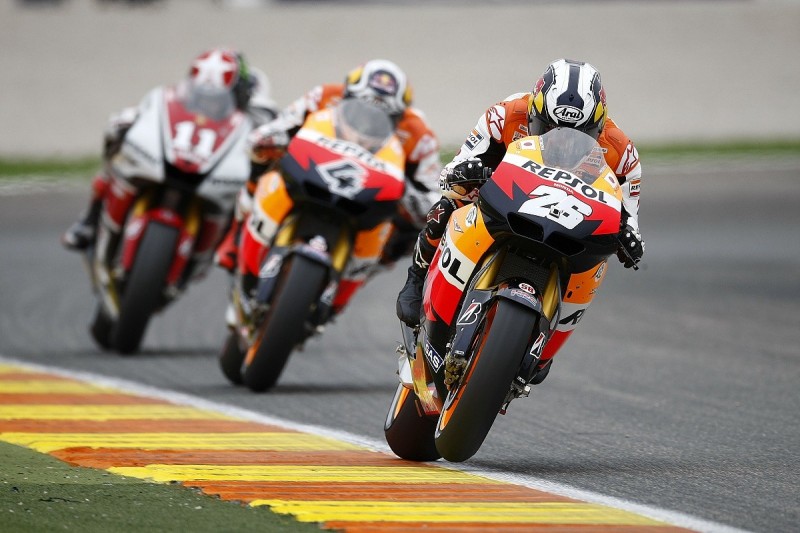 Andrea Dovizioso, who compete alongside Pedrosa at Honda between 2009 and 2011 (pictured above at Valencia), said this was an aspect in which he had learned from his former team-mate.

"Dani, he was my team-mate in HRC, and in 125cc, 250cc, he was always a bit faster than me and I tried to study a lot from him," nine-time MotoGP race winner Dovizioso recalled.

"Especially the way he picked up the bike, it was amazing. So in 125cc, 250cc already did a big change in that way, and still in MotoGP continuing in that way.

"Especially for my riding style, I studied a lot and that was one of the worst points for me, and I was trying to learn as much as possible to try to repeat or go in that way."

Reigning champion Marc Marquez has been paired with Pedrosa for his whole MotoGP career so far, winning four of the five riders' titles on offer in that time.

"I can say that when I arrived in MotoGP, he taught me how to ride on the bike," Marquez said.

"I mean, of course, I was not so bad, but then [for] all the details, who was my team-mate? My team-mate was Dani."