The 31-time race-winner announced his retirement on Thursday, following a world championship career that started in the 2001 season in the 125cc category.

Pedrosa's MotoGP spell has been plagued by physical problems, and he has missed 10 races due to injuries since making his debut in the top category in 2006.

"I would have probably liked to have a more robust body," said Pedrosa on Thursday when reflecting on his career.

"Something that could withstand impacts better to be able to suffer fewer injuries in many situations where I had problems."

The 32-year-old admitted that having so many injuries had accelerated the end of his career.

"One way or another, I'm sure injuries sped up the process to reach this point," he said.

"Previously, sportsmen finished their careers much earlier than now. That's very good, but the injuries (Sachsenring 2008 crash pictued below) that I had sped up the process." 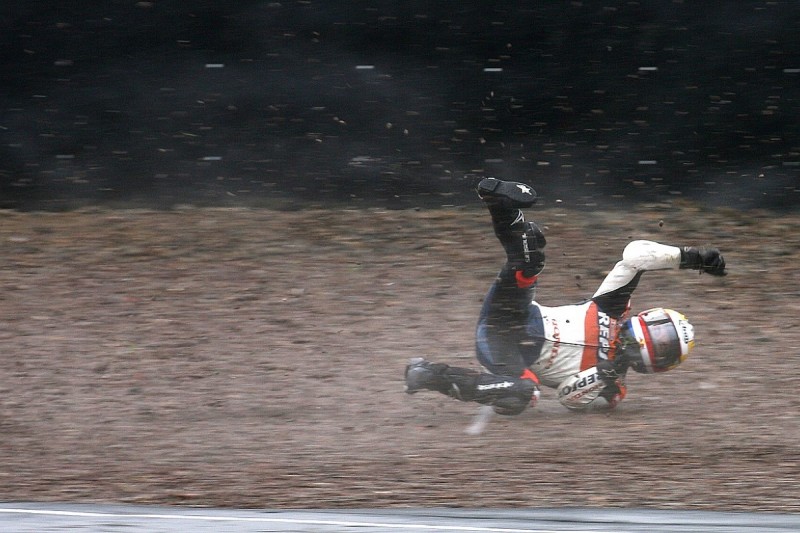 Pedrosa suggested that the main reason for his decision to retire was that he could not give his all and that his priorities were different now.

"What led me to this decision is above all the intensity with which I've lived racing all my life," he added.

"So being realistic I believe this is the road I have to choose."

The Honda rider, who had been linked with a move to a new team backed by Petronas with Yamaha bikes, admitted the possibility to continue in MotoGP had been tempting.

"Like I said in Barcelona, I had the feelings and more or less a clear idea of what would be my decision, but opportunity shows up and you never have to close the door in that way.

"I considered the option and, with more time, it's always better to take these decisions with time, with your people and family, and think about it a little bit longer than that.