The Ducati-bound Spaniard has been in commanding form throughout the season finale weekend, and a new lap record gave him a fourth pole of 2016.

Lorenzo signalled his intent from the outset, recording a 1m29.849s the first time around, the first sub-1m30s MotoGP lap of Circuito Ricardo Tormo.

That was 0.396 seconds ahead of Marc Marquez after the first flying laps, but at the start of his second run Lorenzo fired in a 1m29.613s.

After pitting for fresh rubber for a second time, Lorenzo then went even faster again, setting a 1m29.401s lap that was 0.610s faster than his Valencia pole time in 2015.

When the chequered flag was shown, Lorenzo was 0.340s clear of Honda's Marquez, and the new world champion went marginally faster through the first sector.

However Marquez could not maintain that pace for the rest of the lap and he could not improve to deny Lorenzo a farewell pole for Yamaha.

Valentino Rossi will join Lorenzo and Marquez on the front row on Sunday, albeit after qualifying 0.727s slower than his departing team-mate. 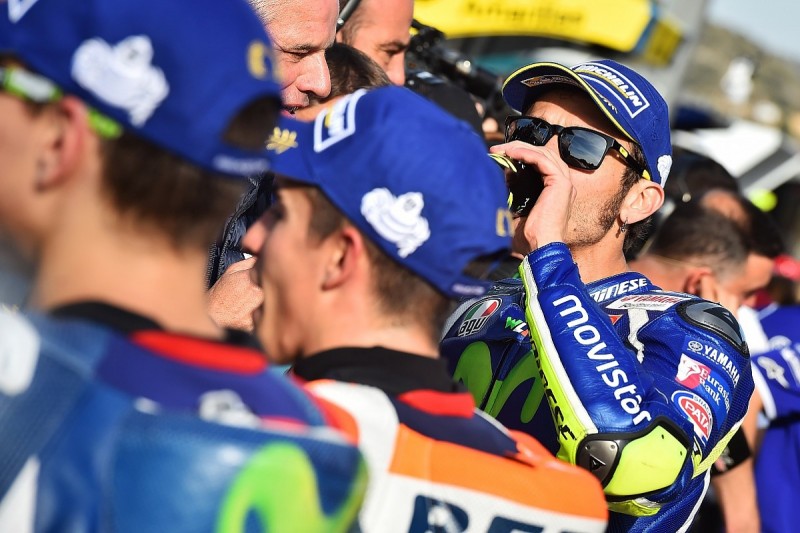 The same three-tenth margins between Lorenzo and Marquez, and then Marquez to Rossi cover third through to eighth.

Maverick Vinales and Andrea Dovizioso for Suzuki and Ducati qualified fourth and fifth, meaning four different manufacturers will start in the top five.

Tech3 Yamaha's Pol Espargaro was the top satellite rider and grabbed the final spot on the second row of the grid in sixth, ahead of Andrea Iannone, Dani Pedrosa and Aleix Espargaro, who crashed at Turn 10.

Bradley Smith set the 10th-fastest time on the other Tech3 Yamaha, his best qualifying result since the Italian Grand Prix in May, while Cal Crutchlow will start 11th.

Crutchlow topped the first phase of qualifying, but lost the front end of his LCR Honda at Turn 10 in the main session and could not improve after rejoining on his second bike with two-and-a-half minutes remaining.

Pramac Ducati's Danilo Petrucci was the other rider to join the main session from Q1, after edging out Avintia Ducati's Hector Barbera by 0.080s. Petrucci will start 12th.

Stefan Bradl outqualified Alvaro Bautista on their last Saturday as Aprilia team-mates. The pair will line up 17th and 18th on Sunday, Bautista's prospects hurt by a crash.

In his final qualifying session before leaving MotoGP, Eugene Laverty fell in Q1, but got back on his second Aspar Ducati and wound up 19th in the order.

That was one spot ahead of debutant KTM and Mika Kallio, who qualified in 20th place - ahead of Tito Rabat and Yonny Hernandez - with a time 2.691s off pole.