Lorenzo joins Ducati this year after nine seasons with Yamaha, and set the third- and eighth-fastest times on two days of running at Valencia in November.

On Ducati's 2017 bike, Lorenzo found the going significantly tougher on Monday at the Malaysian Grand Prix venue, managing only the 17th-fastest time.

Asked if the outcome was disappointing, Lorenzo said: "Not disappointed, but surprised, because I expected I'd be more or less the same as Valencia, not very far.

"What gives me confidence is we made a huge improvement during the day, and also to see three or four Ducatis at the top.

"This demonstrates the bike has the potential to go very quick, at least for one lap.

"Little by little we are getting closer and tomorrow we'll be closer if the weather allows it." 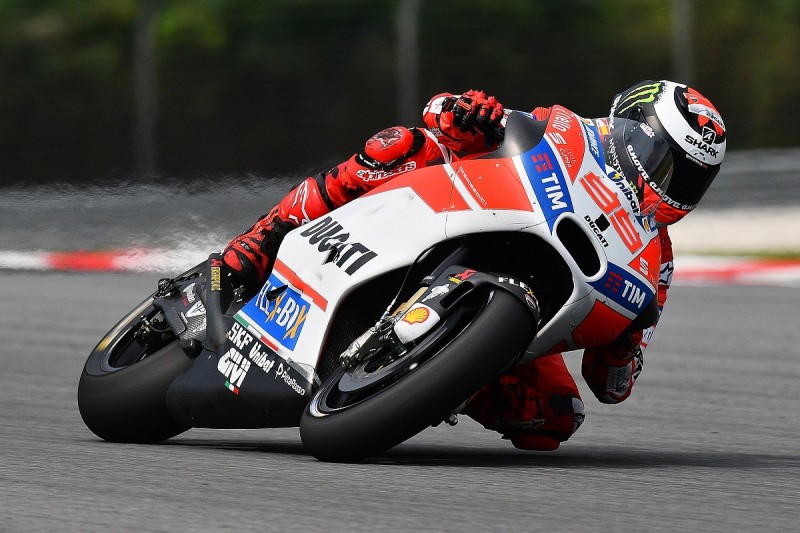 Lorenzo says his focus is on adapting his braking from the style he used with success with Yamaha.

"At Valencia everything was easier, because I rode more or less the way that I've ridden for the past nine years and the times were there," said Lorenzo.

"Here, however, riding the same way it was much harder to go quick, so I'm understanding that it's a bike that requires a pretty different riding style than what I'm used to.

"I set my time with a used tyre and when it was too hot, so I think I could have improved a few tenths.

"But there's a long way to go, especially under braking.

"I'm used to braking a lot earlier and I'm losing a lot under braking.

"This bike is basically ridden the opposite way, so until I learn how to extract the best from the bike it will be hard to be among the quickest."