Erstwhile Moto2 championship leader Marini, who races for Rossi's VR46 team in the intermediate class and has won three times this year, has been linked to the second Avintia seat for some time.

Bastianini confirmed he'd signed for Ducati in September at Misano, with it all but confirmed at the time it would be with Avintia.

The 2014 Moto2 champion Tito Rabat does have a contract with Avintia for 2021, but his place was never assured, with it looking more under threat as discussions between the team and VR46 intensified in the weeks following the Misano rounds.

On Saturday at the European Grand Prix, Ducati officially completed its 2021 roster of riders with the announcement of the signing of Marini and Bastianini.

"Having the great opportunity to race in MotoGP in 2021 is a dream and the wish that all riders have since they were little," Marini said.

"In these years with the Sky Racing Team VR46 I have accumulated a lot of experience and thanks to them I have grown and achieved my first important results."

Bastianini added: "Racing in MotoGP is a dream, and I am very happy to be able to do it with Ducati, a brand of which I have been a great fan since the days of my idol Casey Stoner."

Current Pramac duo Jack Miller and Francesco Bagnaia will step up to the factory squad to replace Andrea Dovizioso and Tech3-bound Danilo Petrucci.

At Pramac, Johann Zarco will step up from Avintia alongside rookie Jorge Martin - both of whom riding current-spec factory machinery. 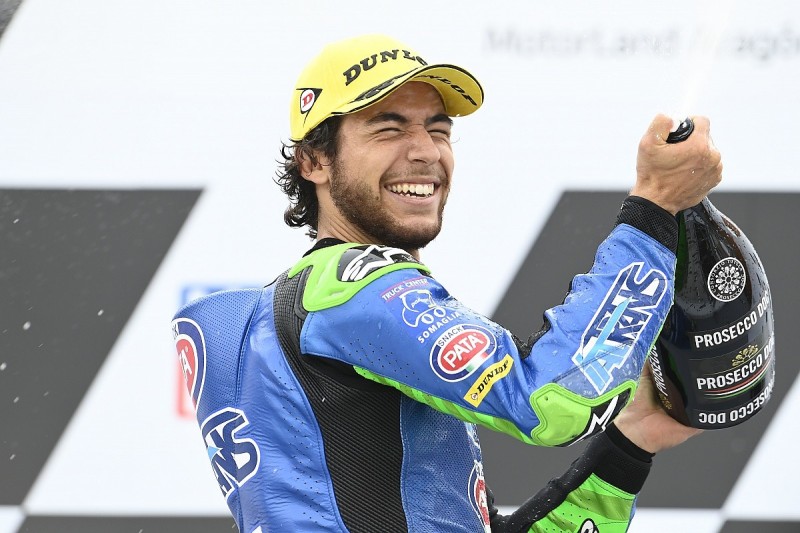 Bastianini is currently seven points off Moto2 championship leader and ex-Aprilia MotoGP rider Sam Lowes with three rounds to go, while Marini is 23 back after a tough France/Aragon triple-header.

Martin's Moto2 title hopes were dashed in September when he was forced to miss the Misano double-header after catching COVID-19.

The firming up of Avintia's line-up means there is just one more seat left vacant on the 2021 grid, at Aprilia alongside Aleix Espargaro.

Aprilia is awaiting the verdict from the Court of Arbitration of Sport hearing on overturning Andrea Iannone's 18-month doping ban, which is expected within the next 10 days.

The Italian marque has repeated its desire publicly to retain Iannone, but it is understood outgoing LCR rider Cal Crutchlow has a pre-agreement in place with Aprilia for 2021.

Last week Jorge Lorenzo confirmed joining Aprilia as a test rider was an option for 2021, and looks set to be replace at Yamaha by Dovizioso - as first reported by Autosport.

Avintia's future beyond 2021 - when the current agreement between the independent teams and promoter Dorna Sports expires - looks uncertain, as rumours suggest VR46 could take over those grid slots in 2022.

VR46 has confirmed Marini will ride in the team's colours at Avintia next year.

Gerloff: Rossi thanked me for looking after his Yamaha MotoGP bike