Fabio Quartararo says tyre warm-up in the cold conditions at Le Mans on Friday of the MotoGP French Grand Prix was “a total disaster” after a slew of crashes.

On his first outing since the arm-pump issues that robbed him of a comfortable victory in the Spanish GP at Jerez, the factory Yamaha rider was responsible for one of the nine crashes during Friday’s mixed-weather practice sessions, when he slid off his M1 at the Dunlop chicane in FP2.

Everyone walked away from their tumbles unscathed, with Quartararo ending the day second overall behind compatriot Johann Zarco on the Pramac Ducati.

Quartararo says his recently operated-on right arm was “strange” but generally fine on Friday, while noting his wet pace is “missing some speed” having ended the damp FP1 16th.

“Yes, arm feels a little bit strange, but feels okay,” he said when asked by Autosport about his day.

“Dry conditions was really good, but to warm up the tyre is a total disaster for everyone I think.

“Normally I’m quite good at it, but couldn’t really reach a good point. It’s not easy, but in the wet we have a good feeling but are missing some speed.

“I think I wanted to take way too much care of the tyre compared to the other Yamahas. So, we will have to check it well but we miss not so much feeling, but more speed.”

Quartararo feels the situation with tyre warm-up at Le Mans is not helped by the fact riders are forced to stay on the pit limiter for too long exiting pitlane – which feeds out into Turn 3 at the Dunlop chicane.

“I think first of all that the pit limiter is way too far from where we start in pitlane,” he added.

“It’s not great, I think we need to put it way closer. It’s so difficult to warm up the tyre, but after straight away my pace was good [in FP2].” 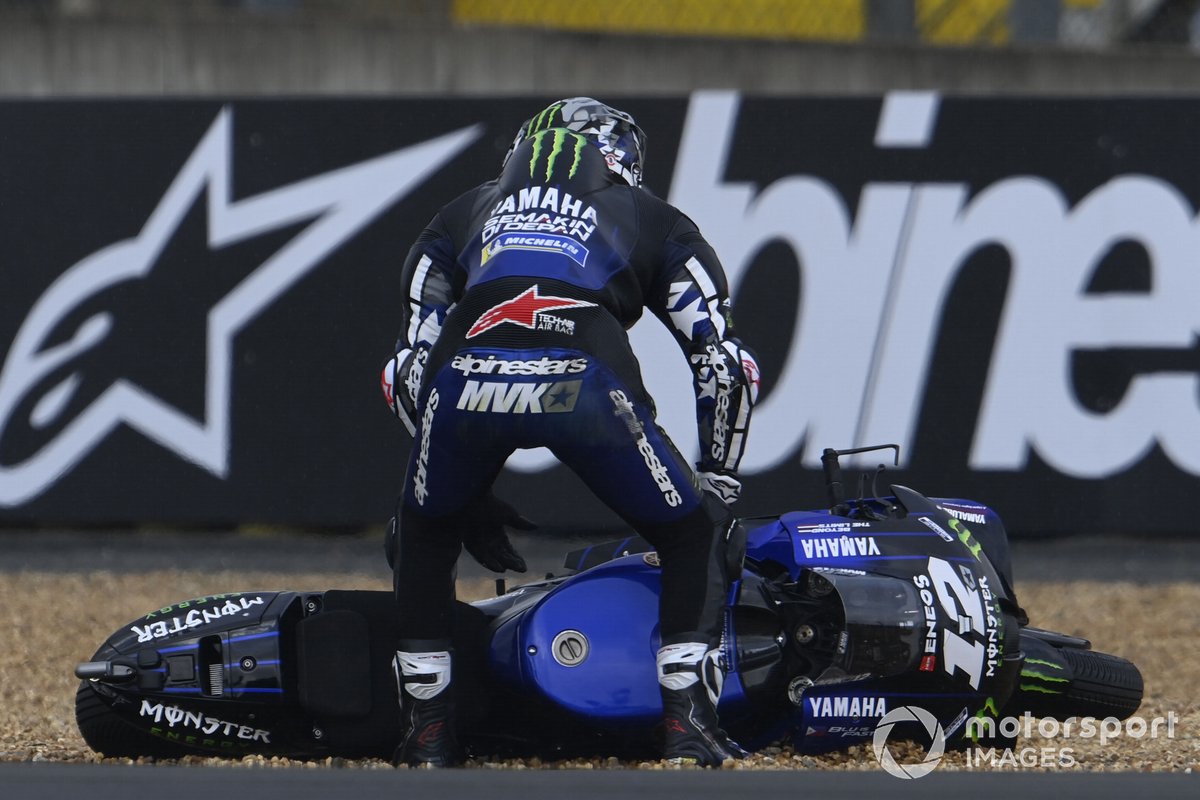 The Spaniard was another of the riders to crash when he fell at the Dunlop Chicane in FP1.

“It has been difficult,” he said.

“I would not say a disaster, but the correct word I would say is difficult because the first laps looks like you are on ice, especially on the left side.

“Right side is straight away good, but the left side takes at least two, three laps [to come up to temperature].”

Explaining how his day went, Vinales added: “It has been good, has been positive.

“I just concentrated a lot today to make race rhythm because we don’t know when again we’re going to get another dry session and in case Sunday is a dry race I tried to understand the race set-up a little bit.

“But, overall I feel really good. We need to improve a few things on the bike, which is not difficult – I think it’s more about details – and then we are ready to fight.

“So, very happy to be back on a good level.”