Yamaha’s Fabio Quartararo says Sunday’s MotoGP French Grand Prix was the “strangest race of my life” having never ridden in a flag-to-flag scenario before.

Quartararo led the field into pitlane in the early stages of the race when the rain fell, but admitted he initially forgot about MotoGP’s flag-to-flag rule when conditions changed.

The Yamaha rider was then handed a long lap penalty for stopping in the wrong box in pitlane, but recovered from this and a lack of grip in the closing stages to claim his first wet weather MotoGP podium in third.

Having ended an FP3 held in similar conditions 19th and struggling to ninth in the wet Le Mans race in 2020 having also started from pole then, Quartararo admits he “didn’t expect” to get to the podium at Le Mans.

“Honestly it was the strangest race of my life because I was in P3, it was starting to rain and in the beginning Maverick [Vinales] and Jack [Miller] were taking it a bit carefully,” he explained. 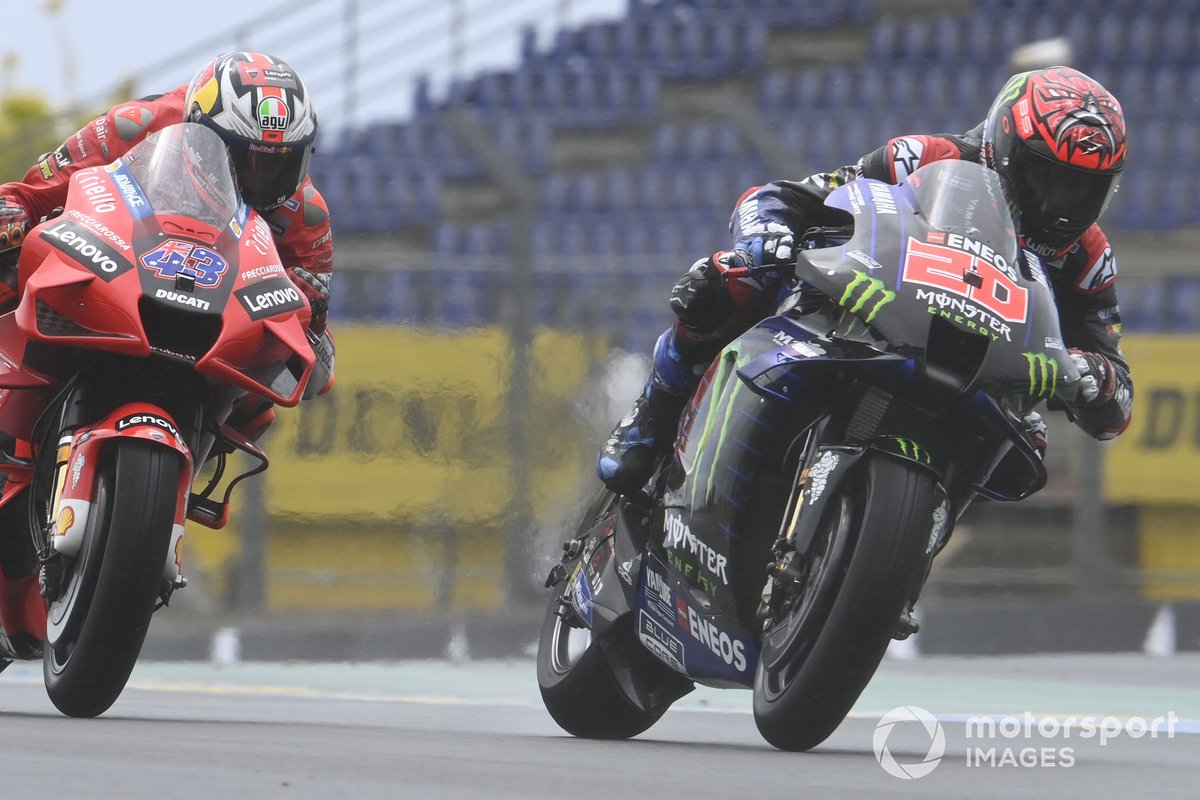 “I said ‘ok, I need to overtake’. I made a great overtake in the chicane, then when it was starting to rain a lot I was like ‘why is it not a red flag’, and then I was like ‘fuck, we are in MotoGP so we have a second bike to go to’.

“I saw the white flag. In turn 9 I nearly lost the rear because it was a massive, massive difference.

“So, I think the guys could catch me through this. I took it carefully, I got the wrong bike, I was going to jump on Maverick’s bike, then I just ran to my bike but it was a great experience.

“And most of all we didn’t expect to make a podium in this condition.

“So, I’m so happy and we made a step in those conditions.”

Building on his first flag-to-flag race, Quartararo added: “Honestly it was so difficult, and I make a small change in the warm-up.

“Was good because the last two laps I make many mistakes but we were still there.

“But I never expected to finish in that position. When I saw I was 20 laps remaining with the soft/soft and it was drying up, I say ‘ok, we are not in a great position’.

“Then I saw the gap to Taka [Nakagami] was big, then I saw it was Johann [Zarco] but he was so fast and I think with the tyre combination he had from the middle of the race was better.

“Then it was [Francesco] Bagnaia, Alex Marquez, but I pushed a lot because Bagnaia was coming so fast.”

This result comes just under two weeks after Quartararo had surgery on the arm pump issue which robbed him of victory at Jerez, with the Yamaha rider now leading the championship again by one point.

“It feels really good because when you think back to Jerez it’s a big shame because I was there to win because I was feeling so great,” he added.

“And when you have this surgery, it was tough to accept but then you say ‘ok, it happens’.

“We arrived here, straight away in the dry conditions in FP2 I felt good – a bit of pain.

“And in the race maybe it’s even better that we have this condition that we don’t make 27 laps at the limit.

“So, honestly after the surgery and everything to be on the podium is amazing.”