The Ducati rider was caught speeding marginally when he entered pitlane to take his second bike when rain started to fall on lap five of Sunday’s 27-lap Le Mans race.

Both he and Ducati team-mate Francesco Bagnaia copped double long-lap penalties for speeding in pitlane, with Miller admitting he didn’t think the notification was correct.

All of this came after the Australian locked up at the Blue esses at Turn 11 and ran off track just before coming into pitlane for his wet bike.

Miller was able to minimise time lost to the race leader Fabio Quartararo on laps nine and 10 when he served his penalties, before taking the lead on lap 12. 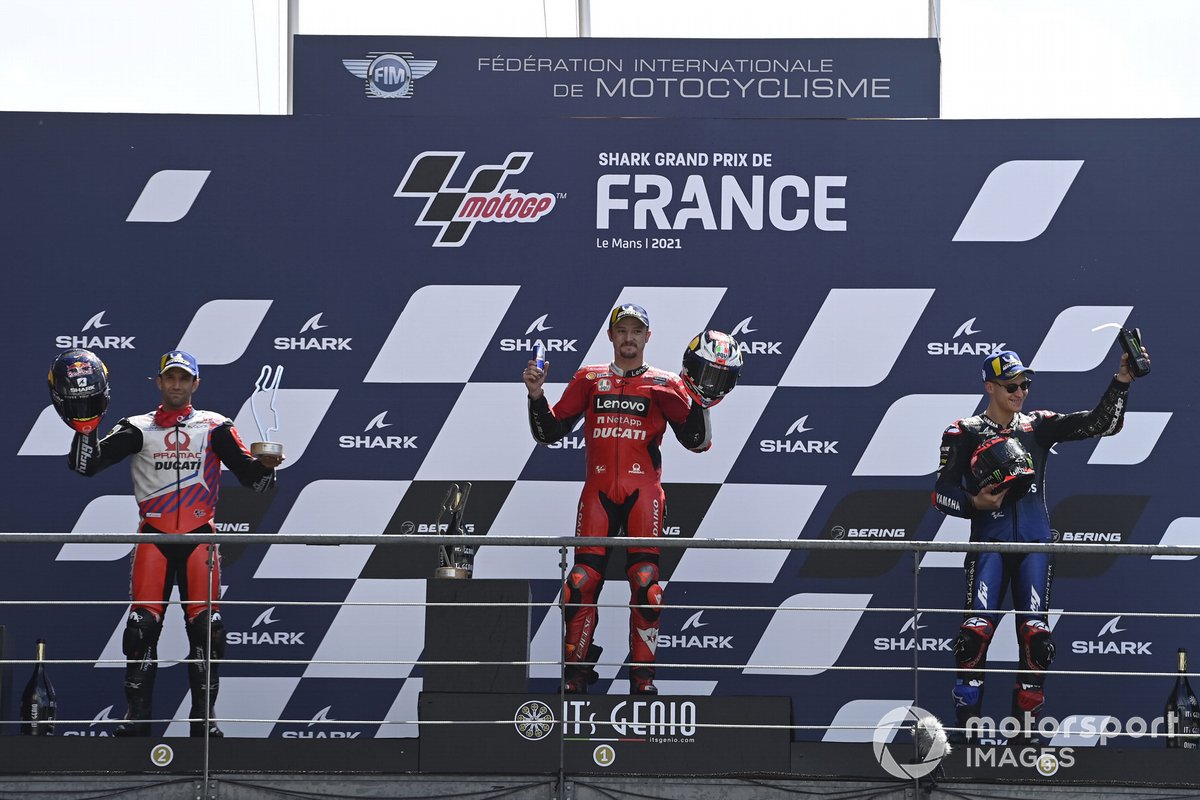 “It was a long race, that’s for certain,” Miller said following his second win of 2021.

“I thought we’ll be alright, it was pretty much dry. But as soon as Maverick [Vinales] got in front of me it started drizzling a bit.

“I was just getting attacked by these Monster Energy Yamahas. We both [Quartararo and I] came close at Turn 8, and then in the back straight it was like a wall.

“We both basically rode into a wall of rain and his bike was all over the place into the first chicane and then I went into the second one, I was just trying to stop the thing and locked both tyres and instantly aimed for the gravel.

“The double long lap penalty afterwards I didn’t really believe it at the time, I thought ‘what did I do wrong?’

“But the old French speed traps get me all the time.

“Had to bust those out, it was a bit dodgy as I hadn’t even looked at the long lap penalty all weekend.

“I went in there and saw the asphalt looked like the old stuff, thought it might be a bit slippy.

“But the second one was a bit quicker, I didn’t lose too much to him and managed to recover to him [Quartararo].”

As the track dried out in the closing stages, Miller signalled to his garage to prepare his dry bike, but ultimately elected against the switch as conditions were “a bit touch and go” still relative to the time lost pitting again.

“I was really thinking about it, but I didn’t know the gaps after [the first swap] and I was a little borderline,” he explained.

“With seven laps to go… it would’ve cost me at least 40 seconds to go through pitlane, because it’s so long here.

“The first sector was a bit touch and go, I’m glad I didn’t but I was thinking it for a bit.”