High winds and rain earlier in the day meant conditions were not as good as they were during Thursday night's first session.

Vinales, Alvaro Bautista, Marc Marquez and Jonas Folger took turns at the top of the timesheets in the early stages before Vinales took command nine minutes in.

His benchmark time of 1m55.378s put him three tenths of a second clear of Marquez, who slotted into second ahead of Folger's Tech3 Yamaha.

On his next lap, Vinales found his path blocked by Yamaha team-mate Valentino Rossi, and once he had cleared the Italian he lost the front end of his works M1 machine at Turn 4 as he ran off-line.

It was his first crash in an official session as a Yamaha rider, although he had fallen during a private test at Sepang late last year.

Uninjured, Vinales quickly returned to the Yamaha pit to jump on his number two bike and continued in the session, and his earlier time remained the benchmark until the closing moments. 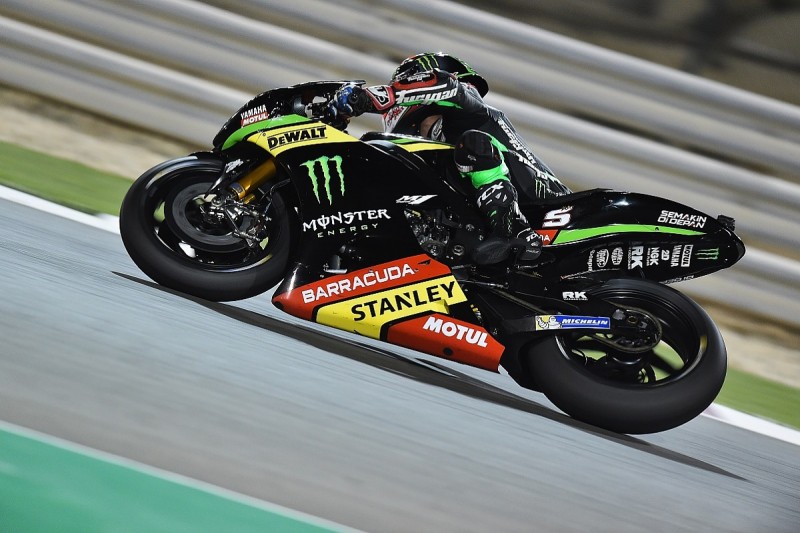 With the majority of riders fitting a new tyre late on, a flurry of late times included Johann Zarco shooting to the top of the timesheets, quickly followed by team-mate Folger and Redding.

The factory Ducati of Andrea Dovizioso knocked Redding off the top spot with a 1m55.185s, before the British rider responded with a 1m55.085s to end the session on top by a tenth.

Behind Dovizioso, Folger and Zarco ended up third and fourth, while Vinales's earlier effort was enough to keep him fifth.

The Spaniard's Thursday benchmark remains the fastest of practice so far, with Redding third on the combined order.

Rossi languished outside the top 10 until the closing minutes, but made a late jump up to sixth place, ahead of Bautista's Aspar Ducati and Jorge Lorenzo on the second works Desmosedici.

Completing the top 10 were Marquez and Aleix Espargaro.

Andrea Iannone was best of the Suzukis in 15th, 0.984 seconds off the pace, while Dani Pedrosa ended up down in 19th on the second works Honda, 1.445s slower than Redding.

KTM once again struggled, with Pol Espargaro the better of its two riders in 21st place, 2.031s away from the top spot.