Yamaha's Maverick Vinales topped third practice for the Qatar Grand Prix, while Jorge Lorenzo will have to navigate the first phase of qualifying in his Ducati MotoGP debut

In a relatively sedate session, times failed to trouble the pace set on Thursday by Vinales.

The Spaniard led the way for the bulk of the session with a 1m55.594s, and then 1m55.518s, but with 15 minutes to go that was still more than a second slower than the benchmark he set in first practice.

Approaching the final five minutes, KTM's Bradley Smith was the only man to have improved on his previous best in practice, albeit remaining at the foot of the order.

Cal Crutchlow was the first rider to make a move, displacing Vinales at the top of the order with a 1m55.334s, and then quickly displaced himself by Johann Zarco with a 1m55.230s.

While a flurry of times followed, only 10 of the 23 riders managed to improve on the times they had set in the previous two sessions.

Crutchlow regained top spot briefly, but was then overhauled by Andrea Dovizioso and Andrea Iannone, before Vinales improved after the chequered flag was shown.

Vinales's 1m54.834s was still 0.516 seconds slower than he managed 24 hours earlier, and he leads the group of 10 riders advancing automatically to the second phase of qualifying on Saturday. 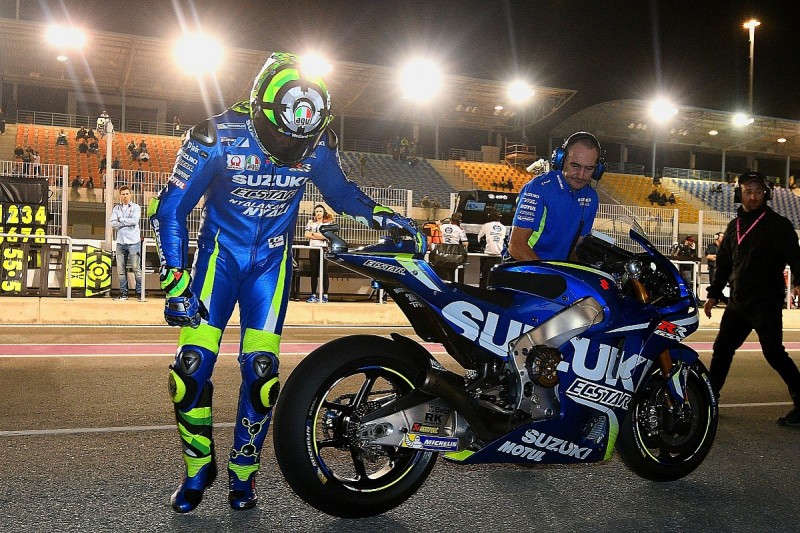 Iannone regrouped from a quiet start to the weekend, 13th and 15th in the first two sessions, to finish 0.014s behind Suzuki predecessor Vinales for the session, and 0.532s adrift on combined practice times.

Reigning world champion Marc Marquez was seventh fastest, but his Thursday time ensured he remained third in the overall order, ahead of Tech3 Yamaha rookie Zarco and Ducati's Dovizioso.

Lorenzo, though, will have his work cut out to join his new team-mate Dovizioso in the second phase of qualifying, missing out on one of the automatic spots.

The three-time MotoGP champion was ninth fastest in the session, but only 12th overall.

Practice two pacesetter Scott Redding had an early scare, when the bodywork on the left-hand side of his Pramac Ducati popped open on the run to Turn 1.

Redding nursed his bike back to pitlane and rejoined the action, but crashed at Turn 2 in the closing minutes.

However, he had done enough to finish sixth in the combined order and book a Q2 place.

Honda's Dani Pedrosa wound up seventh overall, while Crutchlow and Jonas Folger crashed at opposite ends of the session - at Turn 2 late and Turn 4 early, respectively - but wound up eighth and ninth.

Valentino Rossi booked the final guaranteed place in the second phase of qualifying, despite only setting the 13th-fastest time on Friday evening.

The Yamaha rider secured the final place with 10th in the combined standings, pipping Danilo Petrucci - who crashed early - by just 0.021s.

Aleix Espargaro was the top Aprilia rider in 15th, while the KTMs of Pol Espargaro and Smith wound up 22nd and 23rd.