Miguel Oliveira says the new KTM chassis he won on at Barcelona is not the "game changer" it appears after topping Friday practice for the MotoGP German Grand Prix.

The Portuguese rider didn't score a top 10 finish until the Italian GP last month when KTM introduced its new frame, which was designed to help get the bike out of corners better and work with Michelin's softer 2021 front tyres.

He was second in the Mugello race and went onto win the following Catalan GP.

Carrying that form into the Sachsenring on Friday, Oliveira disputes suggestions the new chassis has been revolutionary, citing the fact that both he and teammate Brad Binder have shown speed at other races in 2021 but failed to see the chequered flag for various reasons.

"KTM did a good job bringing a good improvement on the frame," Oliveira explained. "I don't know how much it's giving us, I don't believe it's giving everything.

"But small details count quite a lot in this category nowadays and the rider who understands better how to get the maximum from each detail will be the one who can be faster in the end.

"I think I managed to do it at the moment a little bit better than the rest but I don't think it's giving us a lot of advantage.

"I said yesterday it's misleading that conclusion [that the chassis has transformed KTM's fortunes] because of course you maybe don't analyse every session that we do but we do it, and we have very, very good pace, sometimes a lot of potential to be fast in many tracks.

"And in every GP we showed that we were strong in a practice or another, but we couldn't finish the race for one reason or another.

"So that gives the illusion that we only came up in Mugello.

"But it's not quite like that, we've been there a little bit working in the shadow, and so maybe that gives the feeling that whatever we brought to Mugello was a game changer. 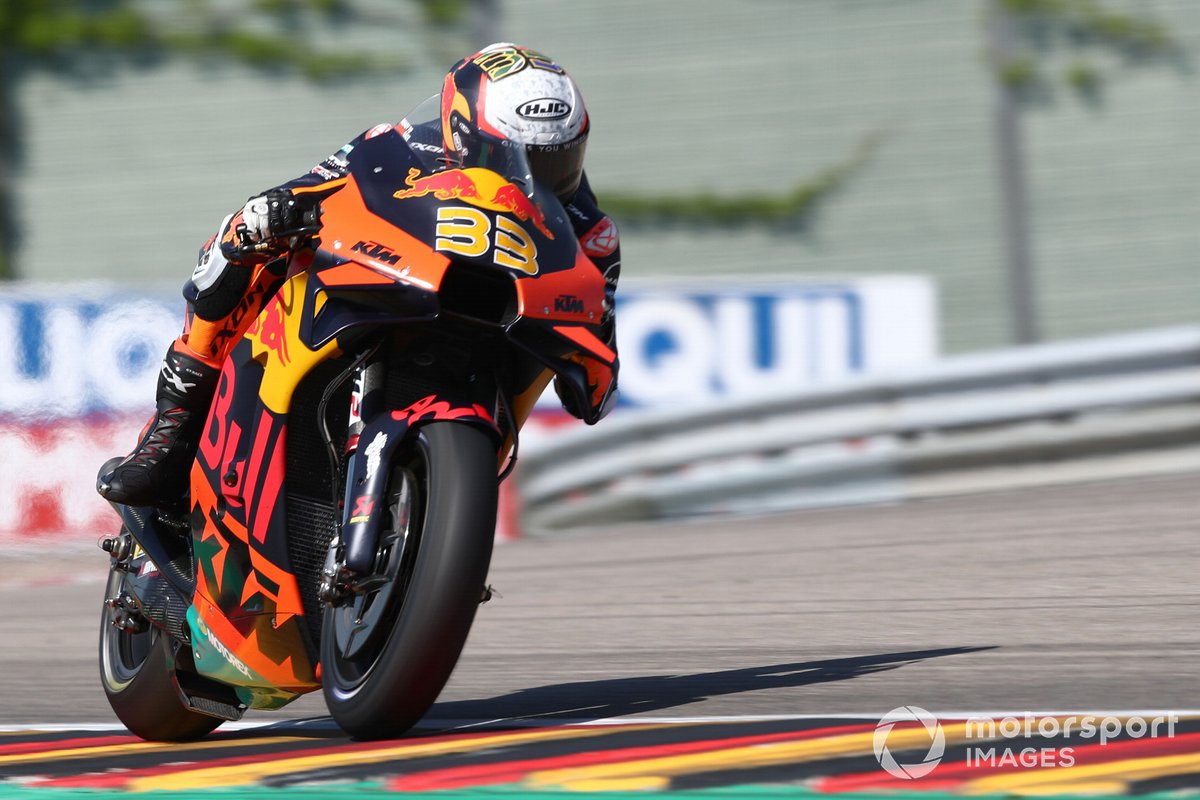 Binder was over seven tenths off Oliveira in 15th after Friday's running, but admits learning the Sachsenring on a MotoGP bike for the first time proved harder than he expected.

"Today has been a lot more challenging than I expected," Binder said.

"To try and figure out how to ride the MotoGP bike around here at the Sachsenring has been a lot harder than I anticipated.

"It's quite different because you arrive with a lot more speed at certain places and the way you need to use the throttle to keep the speed going with not too much spin is quite different.

"So, in general it's been a bit of a learning process today, but in the end I was starting to feel better.

"I've still got a lot to improve still but at least I've got a better idea of what to do on track."