Vinales, who set the pace on the opening day, had a rare crash in the middle of Wednesday's running but went on to set the best time of the test - a 1m30.757s.

Just like on Tuesday, the track was cold and damp to start the session, and remained empty for the first two hours before KTM's Johann Zarco again kicked off the proceedings.

But reigning champion Marquez, venturing out on track on a 2019 prototype Honda, was much quicker straight away, taking a lead of over nine tenths with four hours left on the clock.

The rest of the pack gradually worked their way towards Marquez's 1m31.019s, and in the penultimate hour he was finally dethroned by Dovizioso.

Marquez, who had spent the day switching between two black-liveried prototype RC213Vs, joined Dovizioso in the sub-1m31s range in the final hour, but couldn't topple the Ducati rider, coming up 0.021s short. 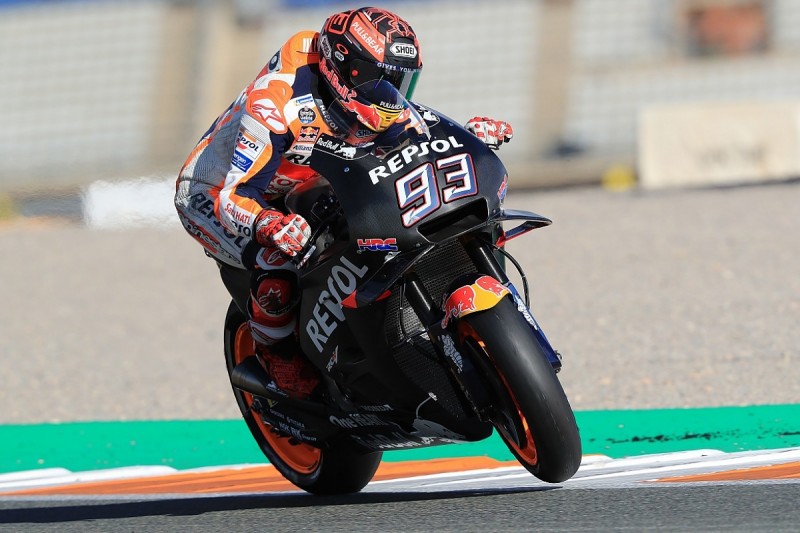 A few minutes later, Vinales overhauled both, finding two tenths on Dovizioso's effort in the final sector to complete a clean sweep of the two-day test.

Pramac Ducati's Jack Miller followed Marquez on his fastest lap to end up fourth, while his former team-mate Petrucci slotted into fifth place in the closing minutes.

Aleix Espargaro was the lead Aprilia in 10th, seven tenths up on new team-mate Andrea Iannone, who crashed twice during the day.

Ducati tester Michele Pirro took a tumble for the second time in two days, while Yamaha's new test rider Jonas Folger left his prototype M1 a mangled wreck when he fell off at Turn 10 and the bike clattered against the barrier at speed.

Tech3's Hafizh Syahrin crashed his new KTM at the same corner in the final minutes of the day, while shortly thereafter Bradley Smith ended his first outing as an Aprilia tester by falling at Turn 1.

Francesco Bagnaia was the highest-placed rookie for Pramac Ducati in 11th, while Honda's marquee new signing Jorge Lorenzo was 12th, just over eighth tenths off the pace.

MotoGP post-season testing will conclude next week with two days of running at another Spanish venue, Jerez.

How Yamaha broke its miserable streak