Andrea Dovizioso claimed the third victory of his MotoGP career in the Italian Grand Prix, winning his and Ducati's home race

Dovizioso started from the front row and ultimately made his move in the second half, taking victory in dry race for the first time and becoming the first local rider to win at Mugello since Valentino Rossi in 2008.

Rossi got the jump off the line and led the field around the first lap, before Jorge Lorenzo took the lead for the first time.

Lorenzo capitalised on the straightline speed of the Ducati down the front straight, got down the inside of Rossi at San Donato and overshot the corner, but then made it stick through Luco.

His time in the lead was fleeting, Rossi - racing 10 days after injuring his chest in a motocross accident - firing back down the inside at Scarperia.

The pattern repeated the next time around, with Lorenzo this time making his San Donato pass stick, only for Rossi to slice back past at Scarperia again.

The next time around, lap four, Vinales gave Rossi a taste of his own medicine at Scarperia to take the lead, as Lorenzo started to fade, replaced in the lead battle by team-mate Dovizioso.

Dovizioso blasted past Rossi down the front straight to slot into second at the start of lap six and then kept leader Vinales in touch.

At half-race distance, Vinales led Dovizioso by two tenths, with Rossi and Petrucci - who rose from ninth on the grid - completing a lead quartet covered by eight tenths.

Dovizioso then took the lead for the first time at the start of lap 14 of the 23, powering past Vinales and then safely navigating San Donato to stay ahead.

As he skipped away by seven tenths over the balance of the lap, Petrucci put a move on Rossi at Bucine, then repeated the pass on Vinales on lap 15 to move into second.

With four laps remaining, Dovizioso finally had his lead out beyond one second, as Vinales passed Petrucci to reclaim second place at San Donato.

Vinales then got back within one second of Dovizioso, but he could not get any closer and challenge for a fourth win of the 2017 season.

Dovizioso crossed the line 1.281 seconds clear of Vinales and becomes his closest challenger in the championship, 26 points behind the Spaniard. 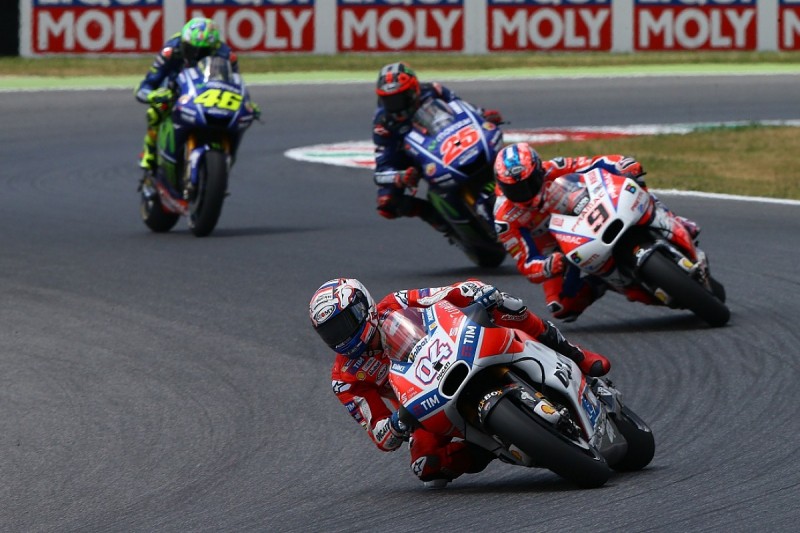 Alvaro Bautista made it three Ducatis in the top five on his Aspar-run 2016 Desmosedici, holding off reigning world champion Marc Marquez.

Tech3 Yamaha's Johann Zarco improved in the race after a tough qualifying session, finishing seventh from 11th on the grid.

Zarco was one of the riders to demote Lorenzo after his early charge, the Spaniard finishing eighth, 14.393s behind Dovizioso and just ahead of Ducati wildcard Michele Pirro, who got away slowly from fourth on the grid and was not a factor.

Having run with Zarco into the closing laps, Suzuki's Andrea Iannone - who started 16th - lost places to the Ducatis late and finished 10th.

Honda stablemates Cal Crutchlow and Dani Pedrosa clashed on the final lap while in 11th and 12th places, the LCR satellite rider Crutchlow collected at Scarperia after Pedrosa lost the front end of his bike.

Aprilia's Aleix Espargaro jumped the start and served a ride-through penalty, dropping from 12th to the back of the field and had a mid-race off before eventually retiring.

His brother Pol Espargaro was the only other retiree until Pedrosa and Crutchlow's incident, pitting with a mechanical problem on his KTM two laps earlier.