The three-time world champion has had a challenging start with his new team after nine seasons with Yamaha, with third place at Jerez the obvious highlight.

However Lorenzo finished 14.767 seconds behind winner Dani Pedrosa in that race, a deficit that would have only been good enough for an average of sixth place in the other four grands prix.

Asked if he felt he could fight for the podium at Mugello from seventh on the grid, Lorenzo said: "I would like more than a podium.

"I would like to make a good start and be able to have a similar pace as the top guys and to improve this 14 seconds of disadvantage that I finished at Jerez.

"If this gives me a podium, I will be very happy.

"If I couldn't finish on the podium but I finished very close to the winner I will also be happy."

Lorenzo is one of three factory Ducatis in the top seven, with Andrea Dovizioso joining Yamaha pair Maverick Vinales and Valentino Rossi on the front row and wildcard Michele Pirro qualifying fourth.

Finishing the session 0.577s off pole and 0.317s off Dovizioso, Lorenzo lamented not gaining as much as other riders on a single lap with fresh tyres.

"For some reason on this track I wasn't really explosive for one lap," he said.

"I feel more comfortable than ever, but still not enough to take profit of all of the potential.

"There's something still that we missed. For example the Yamahas improved one second, when I could just improve half-a-second, or six tenths. 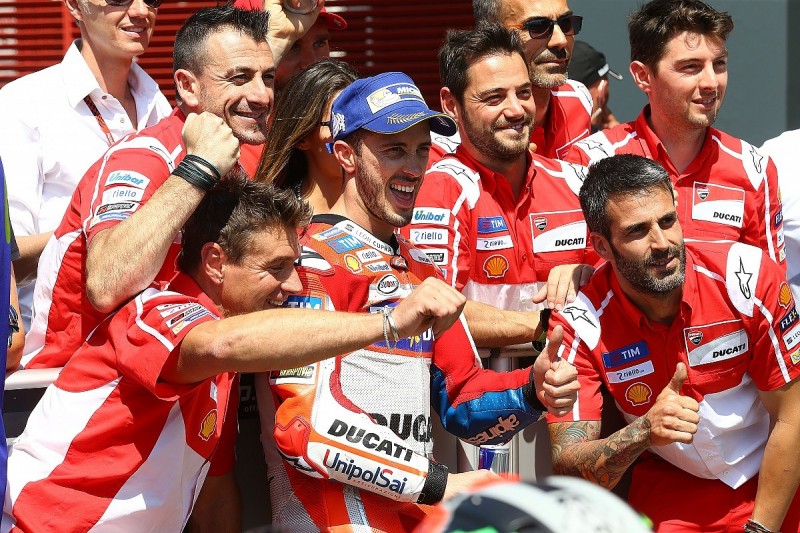 BEST FEELING SINCE QATAR FOR DOVIZIOSO

With Dovizioso, a factory Ducati will start on the front row of the grid for the first time in 2017.

Ducati starts its home race with two podiums on the board, and Dovizioso says he feels the strongest he has since the Qatar season opener, which he finished second.

"I didn't really have the feeling to make a good lap time and be in the first row," he said.

"But all the Ducatis are working quite well this weekend, so I'm happy about that and I think tomorrow a lot of Ducati can make a good result.

The speed is there, I'm happy about that and the lap time in qualifying confirmed the great job we did this weekend.

"It's the best weekend this year for us, the feeling is the best I feel since Qatar."