The Yamaha rider spent much of the 45-minute session practicing runs with the long lap loop ahead of the penalty he will serve on Sunday.

His first attempt, a 2m00.794s, put him into third place, behind the Aprilias of Maverick Vinales and Aleix Espargaro.

He fell down the timesheets as others improved while he worked on improving his time around the long lap loop.

Suzuki’s Mir finished second, less than 0.1s behind the championship leader, with Vinales in third with a 1m59.123s.

Miguel Oliveira topped the times early on in the session, the KTM man setting a 2m00.863s in the opening laps.

Pramac Ducati rider Johann Zarco continued his quick pace from FP1, setting a 2m01.219s to slot in behind Oliveira. 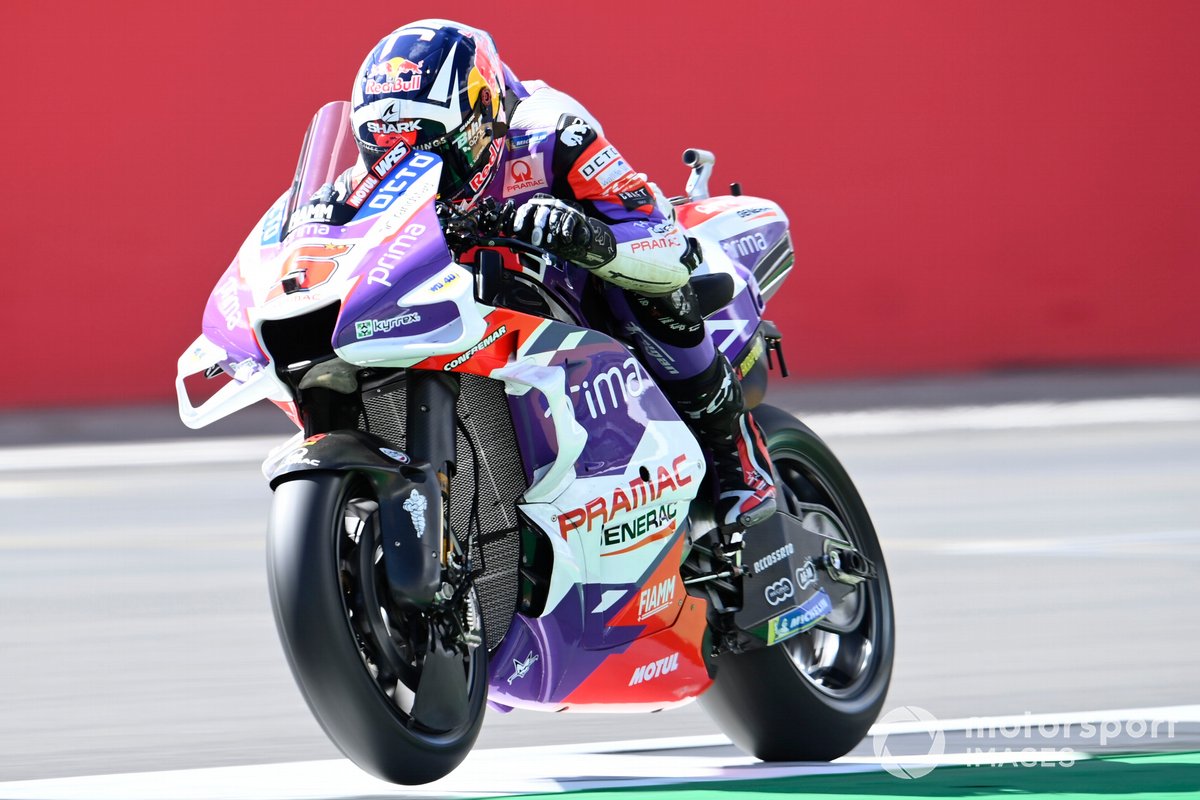 The yellow flags were waved briefly as Darryn Binder went off at Turn 6, having lost the rear of his RNF Yamaha.

Jorge Martin was next to head into the top two, a 2m00.873s quick enough to demote team-mate Zarco.

The Aprilia pair were next to go quickest, Vinales leading Espargaro with a 2m00.484s, as Quartararo slotted into third.

Oliveira briefly went top next before VR46 rider Marco Bezzecchi, who took his maiden podium last time out in Assen with a second-place finish, toppled him with a 2m00.204s.

With 10 minutes of the session complete the times began to tumble, with Alex Rins next to lead for Suzuki before the Aprilias returned to the top, despite Espargaro struggling with the rear into Copse.

Rins went quickest on his 10th tour, a 1m59.351s quick enough to put him top, before Ducati’s Jack Miller split the Aprilias in third.

Soon after, Miller went down at Stowe prompting yellow flags while his factory bike was recovered from the gravel.

Rins further improved several laps later, pushing him 0.4s ahead of Espargaro at the top of the combined standings, as team-mate Mir slotted into second with a 1m59.536s, before Espargaro also improved with a 1m59.426s.

But the Suzuki man improved again the following lap, a 1m59.100s enough to lead until Quartararo’s last ditch attempt. Zarco finished in fourth, with Espargaro and Oliveira in fifth and sixth respectively.

Gresini Racing’s Enea Bastianini finished the session in eighth having trialled a radical new rear aero package, also seen on Martin’s bike, while Miller and Bezzecchi rounded off the top 10.