Rossi's first pole since the Mugello race in late May came thanks to a stunning 1m43.954s lap to beat pacesetter and championship leader Marc Marquez.

The Italian had finished no higher than fourth in a practice session on Friday or Saturday, with his average position 5.75, and was sixth and nearly six tenths off the pace after the first qualifying runs.

At that time, Marquez led the way, having set the agenda with a 1m44.134s effort on his Honda that was 0.265 seconds clear of Jorge Lorenzo.

However Marquez's second run was scrappy, including mistakes on two of his three final laps when he had looked set to improve and then encountering yellow flags at Turn 5 after the chequered flag when LCR Honda's Cal Crutchlow had fallen.

Rossi, though, made the most of the situation.

Running ahead of Marquez on the road, he recorded the weekend's first sub-1.44s lap on his penultimate tour to take pole by 0.180s over the Honda.

Lorenzo snatched the final spot on the front row of the grid after the chequered flag, capping a dramatic day. 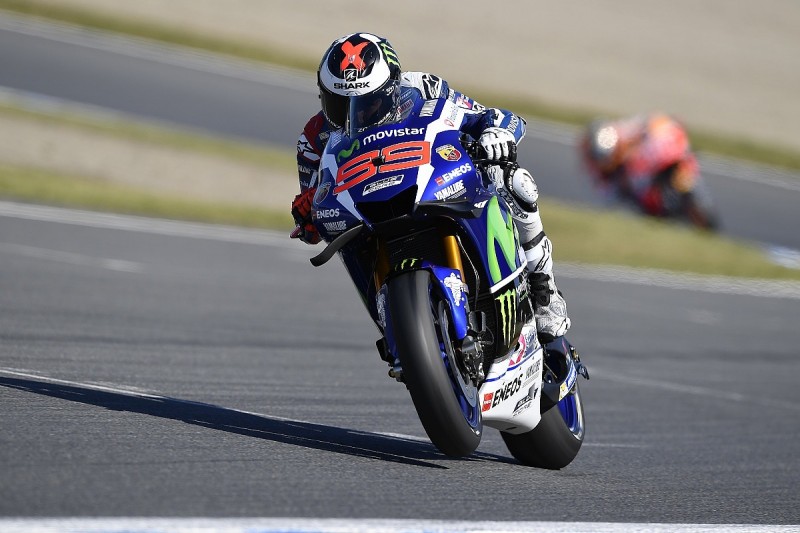 The reigning champion crashed heavily at the end of Saturday morning's third practice session and went to hospital for scans on his left leg, heel and wrist, but was cleared to continue with the weekend.

Ducati's Andrea Dovizioso was demoted to fourth by Lorenzo's late lap, while Crutchlow wound up fifth, ahead of Suzuki pair Aleix Espargaro and Maverick Vinales.

Hector Barbera was eighth on the other factory Ducati, ahead of Tech3 Yamaha's Pol Espargaro, and Pramac Ducati pair Danilo Petrucci and Scott Redding.

Aprilia had a mixed afternoon with Alvaro Bautista and Stefan Bradl.

It looked set to get two riders in Q2 for the first time with Bautista leading Q1 and Bradl up on that time on his final lap.

However Bradl came unstuck at Turn 11 and was bumped down and out of Q2 by Redding, and will start 13th, one place behind Bautista, who crashed at Turn 9 on his first flying lap in the main session and did not set a time.

Returning from injury, Jack Miller and Bradley Smith line up 14th and 15th on Sunday.