The Italian struggled with jetlag when he arrived in Japan, and has since picked up symptoms of a cold, conceding he's "not at 100%".

While he qualified on pole on Saturday, his first in nearly five months, Rossi says he is not feeling confident about getting through the 24-lap race.

"When I push for a lot of laps, I don't feel at the maximum, I'm quite sick and it's difficult to breathe," he said.

"So I'm worried for the race, because the race here is always very long and very demanding because you have to brake hard.

"I hope tomorrow I can make another step and try to fight for the victory."

Rossi rocketed up from sixth to take pole position with his penultimate lap in qualifying, becoming the only rider to lap beneath the 1m44s barrier so far this weekend.

Given his best result in a practice session was fourth, the 37-year-old was encouraged by the progress made on Saturday afternoon.

"Taking pole position is always a special feeling but his time also more, we were struggling during practice," he said.

"Yesterday we were a bit in trouble, and this morning we expected to improve and it was not enough. I was quite far.

"But we worked well, we improved a lot the balance of the bike for FP4.

"I was more positive for qualifying. I thought that I could fight for the front row, because also in the last years, at Motegi I had good qualifying.

"At the end, pole position is something special, it's important for the race tomorrow but especially it's a good feeling." 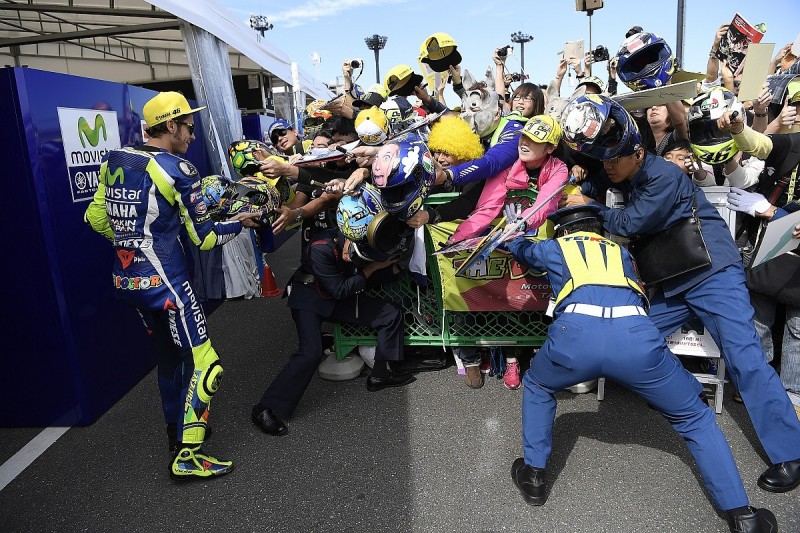 Rossi will share the front row with Honda's championship leader Marc Marquez, and his Yamaha team-mate Jorge Lorenzo, who he feels are slightly ahead on race pace.

"Looking at the paper, also Dovizoso and Crutchlow are quite strong, but it looks like me, Marquez and Lorenzo are stronger," he said.

"We are quite close, but it looks like Jorge and Marc are a little bit faster than me, but I am close.

"And the two Suzukis are good, because Aleix is making good lap times also with the used tyre and Vinales is fast.

"It can be a big fight like at Aragon in the beginning and after we will see.

"We need to work well tonight, try to fix the details and hope for tomorrow for good weather."