The reigning world champion claimed pole position, his 38th in the premier class, by 0.763 seconds over surprise package Karel Abraham - on a 2015 Ducati and in his second start back in MotoGP - on a drying Termas de Rio Hondo circuit.

MotoGP's first qualifying session of the season, after Saturday's action in Qatar was washed out, was run in wet conditions as rain settled in.

That meant fourth practice and qualifying was riders' first real wet-weather running of 2017.

With the qualifying groups essentially defined by Friday practice, Dani Pedrosa and Valentino Rossi safely navigated Q1 to make the main session, while Ducati pair Andrea Dovizioso and Jorge Lorenzo did not.

Rossi vaulted up the order in Q1 with his final lap to book the second of the two Q2 places, moments after dropping from fourth to ninth for exceeding track limits.

Dovizioso was ahead by 0.781s at one stage in Q1 but did not improve again and fell from first to third after the chequered flag.

He missed out on progressing by 0.067s to Rossi and will start 13th, three places ahead of Lorenzo.

Pedrosa and Rossi were in the top three initially in the second phase of qualifying, before Marquez turned a 1m48.571s to take top spot, 1.059s clear of the pack halfway through the 15 minutes, as a dry line started to appear.

That margin was cut by Pedrosa to 0.437s with three-and-a-half minutes remaining, and trimmed again by Danilo Petrucci to 0.337s. 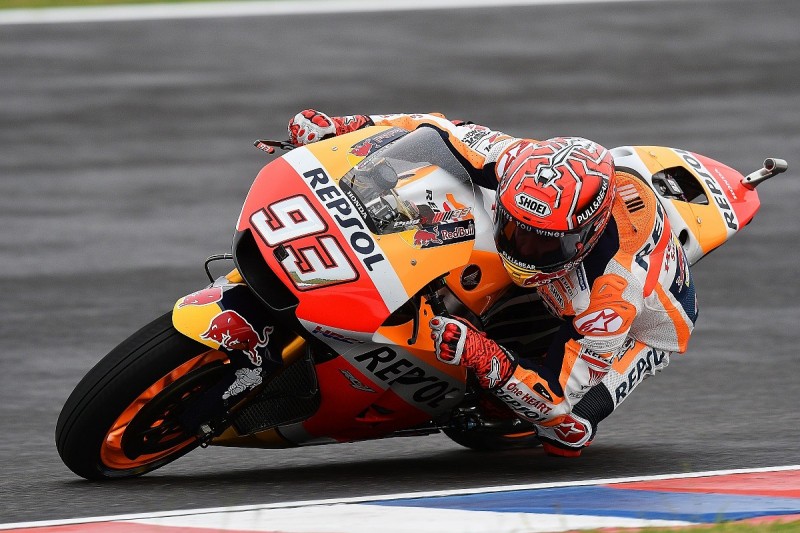 But Marquez was not finished, going even faster to turn a 1m47.512s to secure pole position.

The Spaniard's margin was a mammoth 1.396s, but a stunning lap from Abraham on the Aspar team's Ducati GP15 left the final gap at 0.763s.

LCR Honda's Cal Crutchlow secured the final place on the front row of the grid, his 1m48.278s just 0.003s slower than Abraham, whose previous-best qualifying result was seventh three times across 2011 and '12.

Petrucci made it three satellite riders in the top four for Pramac Ducati, while Pedrosa and Yamaha pair Maverick Vinales and Rossi will start fifth, sixth and seventh.

The Qatar winner and Friday practice pacesetter in Argentina, Vinales found one second on his final lap after the chequered flag to jump up from ninth.

Jonas Folger was the top rookie in 11th for Tech3 Yamaha, while Andrea Iannone tried slicks on his Suzuki at the end of Q2 but switched back after a single lap and had to settle for 12th.

Marc VDS Honda's Jack Miller led Q1 briefly, but missed the end of the session and fell to start 17th, one place behind Lorenzo, and just ahead of KTM pair Pol Espargaro and Bradley Smith.

Aprilia rookie Sam Lowes crashed at Turn 1 at the end of Q1 and will start 22nd, with Suzuki newcomer Alex Rins rounding out the field.

How successful have Formula 1’s new rules been and what should come next? That’s what we ask Ross Brawn in this week’s Autosport magazine, out today (1 December).