The Honda rider set the pace on Saturday morning, and looked the man most-likely to stop Jorge Lorenzo taking pole at Misano for the third-straight year.

Lorenzo had the upper hand between the pair, and was 0.465 seconds clear of Marquez at the end of the first runs.

They left pitlane again at the same time with five minutes remaining, and while Lorenzo found a further two tenths, Marquez could not improve and dropped to fourth, relinquishing a spot on the front row to Valentino Rossi and Maverick Vinales.

"I felt strong throughout the day, especially in FP3 and FP4," Marquez said.

"In the qualifying session I felt quite good with the first tyre, but we couldn't make the most of the second one because there was a lot of traffic and I wasn't able to put in a perfect lap.

"The important thing is that we're on the second row, close to Jorge and Valentino, and have a good pace going into the race, so we'll try to fight for the podium." 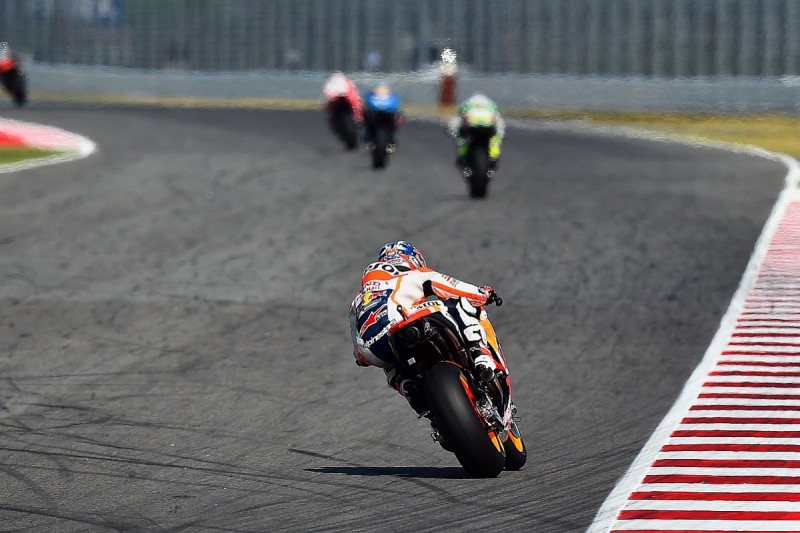 Marquez's factory team-mate Dani Pedrosa has struggled for confidence for the bulk of the year, but has been more competitive in the warmer conditions at Misano.

While he could only manage eighth in qualifying, Pedrosa believes his pace has been better on used tyres.

"Today was a positive day because we have improved our race pace by a lot," he said.

"We will have to concentrate on getting a good start and trying to overtake other riders who do not have much pace early on, because the first part of the track is very narrow and Jorge and Valentino have a free run.

"We hope to move up places quickly so that they do not have much of an advantage, and make the most of the fact that our pace is not bad."

LCR Honda's Cal Crutchlow was the best of the satellite riders, one spot ahead of Pedrosa in seventh, but a week after finishing second at Silverstone he was frustrated to miss out on a spot on the second row of the grid.

"I felt we needed to be on the second row to get away with the front guys and be able to battle, but I'll just have to see what we've got tomorrow," he said.

"We know that it's more difficult here than last week, we can see that from Marc and Dani, but we still have some work to do overnight and then I'll do the best job I can."

MotoGP Misano: Pedrosa charges through to beat Rossi at home