Jorge Lorenzo admits he took more risks than normal to secure pole position for MotoGP's San Marino Grand Prix, with what he feels was the best lap of his career

The Yamaha rider ended a four-month pole drought by dominating qualifying at Misano on Saturday, breaking his 2015 lap record twice.

His eventual margin over team-mate Valentino Rossi was 0.348 seconds, and his second-fastest lap - a 1m32.076s - would have also been good enough for pole.

"You always have the impression that the last pole position is the best lap time of your life," Lorenzo, whose last pole came at Le Mans in May, said.

"But I really think this one is; maybe the two laps, because [1m]32.0s also is also a great time.

"Because already I had this lap time I wanted to risk a little bit to improve.

"I risked more than normal. Finally the risk was worth it, because we made an impressive lap time."

Rossi was only seventh after the first runs, and then had his first major improvement cleared for a track-limits infringement exiting the final corner. 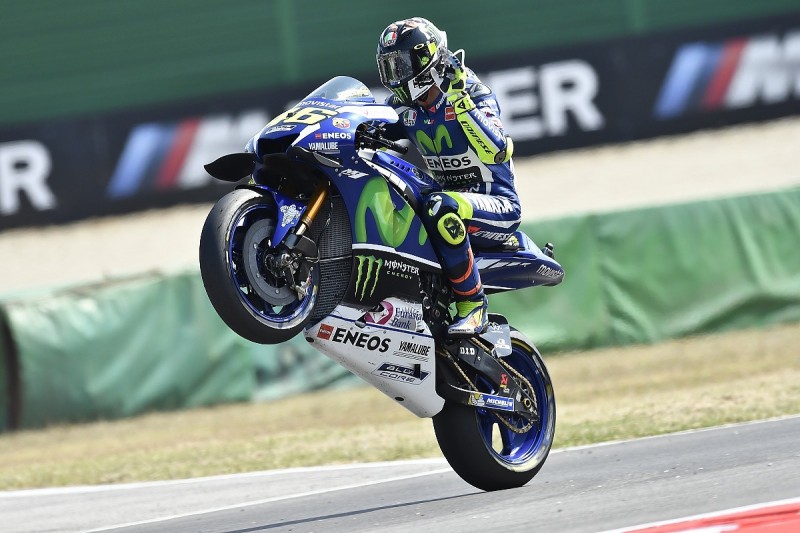 The local hero said qualifying on the front row was his priority.

"It's always very important in MotoGP but especially here at Misano," he said.

"It's a tight track, where it's difficult to overtake.

"During the weekend we have had a bit of up-and-down, because we have fought a little bit with the tyres, we found something that was not perfect.

"I'm happy but we have to stay concentrated, to fix some small details during the lap and wait for the conditions tomorrow and try to understand the right tyre to use."

A number of riders have, like Rossi, reported irregularities with Michelin's rear tyres at Misano, within each compound.

While noting that it also happened during the tenure of previous supplier Bridgestone, riders are hoping Sunday's 28-lap race does not present more tyre irregularities.

"This weekend, some rear tyres have had some problems," Lorenzo said.

"I have had one or two tyres that were not the same performance and a big lack of performance, not only a couple of tenths, maybe half-a-second or even seven tenths.

"That is not normal, so we hope that tomorrow for the race, the rear tyre will be OK."