Sam Lowes says the situation at the Aprilia MotoGP team before his contract was cancelled a year early was "lacklustre" and "unprofessional".

Lowes's manager Roger Burnett said on Friday that Aprilia had exercised its option to terminate the MotoGP rookie's two-year contract early, although Aprilia has not made a formal announcement.

The Briton has endured a difficult first campaign in the premier class, but said he went into the summer break thinking his situation was "quite OK".

Aprilia team manager Romano Albesiano claimed the Brno and Red Bull Ring races would be key to Lowes' future, before Thursday's decision to drop the Brit.

"Honestly, the communication between him [Albesiano] and me, myself and management is so lacklustre and not professional, and it's very difficult," said Lowes, who confirmed his contract had been terminated.

"I wish them the best - I think the bike has great potential to do well in MotoGP - but there's no love lost.

"There's going to be no issues, but I don't owe them anything, because the opportunity they said they gave me wasn't there anyway."

Lowes said he took issue with the fact Aprilia was openly looking for replacements while he was still under contract.

The Italian team is understood to have approached Alvaro Bautista, Danilo Petrucci and Andrea Iannone for 2018 and is now expected to sign Scott Redding, although the Briton denies he has agreed a contract.

"They asked every rider in the world to come here and no one did for a long time," said Lowes.

"It's like if you've got a girlfriend, asking all your mates to go out with her. It's probably not a great situation, is it?" 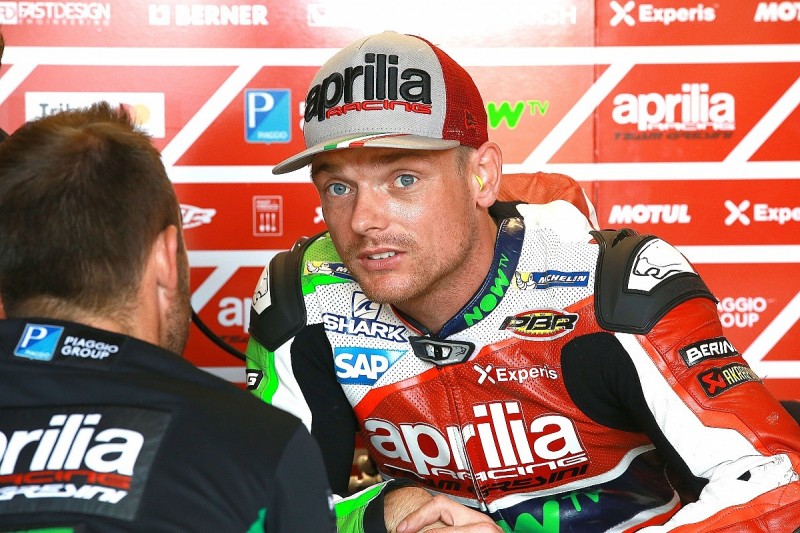 Lowes has scored two points to experienced team-mate Aleix Espargaro's haul of 40 so far this year, but the Spaniard has had priority with upgrades.

"I don't feel I've had a fair crack of the whip, like I've been in the same situation," Lowes continued.

"You're better off asking them why [the situation is as it is], it's like they didn't believe [in me] even before I arrived."

He said Aprilia had told him it wanted a "less risky" rider when explaining why his contract would be terminated.

"I'm motivated to prove them all wrong, and if I do get results end of this year, there'll be some people in the team I'll thank and some people I won't.

"In life, away from the track and at it, you try to be respected - and I try to respect people.

"Some people in there aren't respectful towards me.

"That's difficult. OK, the last results have not been perfect, but I've not done anything to disrespect their brand or the situation.

"Now the ball's in my court, to go out there, prove that they're making a mistake and try and secure my future in MotoGP - that's what I'll try to do."

Redding denies he has signed deal to replace Lowes at Aprilia