After taking his maiden Ducati podium at Jerez, Lorenzo was 16th in the wet-dry morning practice and improved to 15th in a wet second session.

Despite his low-key morning result, Lorenzo said he had felt "unbelievably good" on the bike and better than in the afternoon when his set-up did not work as well in the wetter conditions.

"Quite opposite feelings," he said.

"In the morning I felt, I would say, better than ever in the rain.

"It was half-half, it was quite dry, or not so much water, and I felt unbelievably good on the bike.

"In fact, pushing, I was first, second, first, very easy.

"I didn't feel safe, I didn't feel grip with the rear. So I was slow. I did a lot of laps to warm up the tyre."

"[If] tomorrow it happens again, these conditions, for sure we will change completely the setting."

However, with the forecast for the rest of the weekend looking dry, Lorenzo said he felt his positive morning feeling could translate into dry conditions.

"I believe our setting of today was good for a low quantity of water," Lorenzo said.

"With that quantity of water the lap times were very close to the dry, that setting, so that means that this bike can be very good on the dry tomorrow." 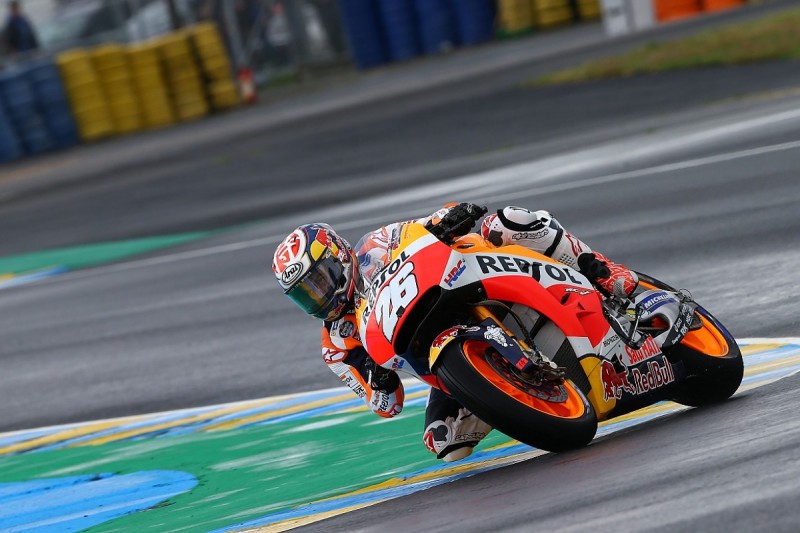 The race winner at Jerez, Dani Pedrosa was another rider to endure a tough afternoon finishing 21st and 4.131s off the pace.

Pedrosa also struggled for rear grip, and said his problems came as a surprise given Honda's 2017 package has looked stronger in the wet.

"It was raining, so I was expecting a good practice, but actually I don't know why I couldn't put temperature in the rear tyre, only about 50 degrees," Pedrosa said.

"Very strange and I was trying to get grip but obviously, with no temperature in the tyre, there was no grip, no feeling and it was strange.

"We don't understand why, we don't know yet why.

Asked if the rear tyre was too hard, he said: "I'm not sure.

"No temperature in the tyre means somehow you are not working well with the tyre, or the tyre is too hard.

"Some riders managed to work with the setting, but from the first rider to the last rider the gap was quite big, four or five seconds when normally it's about two or 2.5, maximum.