Lorenzo tested a Formula 1 car for the first time in October when he did some running in a 2014-spec Mercedes, which he prepared for with mileage in one of MotorSport Vision's Formula 2 cars from the 2009-12 FIA series.

He has limited racing experience on four wheels, including a class win on his Ferrari GT debut in the 2013 Gulf 12 Hours.

"Then I moved to a SEAT Leon and I raced in the 24 hours of Montmelo - we won in our category.

"Three years ago I raced in the 12 hours of Abu Dhabi with a 458 Ferrari and we won our category.

"The category was not so many drivers, it was like a gentleman category, but we won the race."

When asked by Autosport if he planned to do more racing on four wheels in the future, he said: "For the moment I'm quite busy.

"But when I retire I would like to race more in cars.

"It is the same adrenaline, but it's different, it's a new thing.

"You are a journalist, so when you arrive home you don't want to write.

"It's like me, when I'm home I don't want to ride bikes, I want to drive another thing." 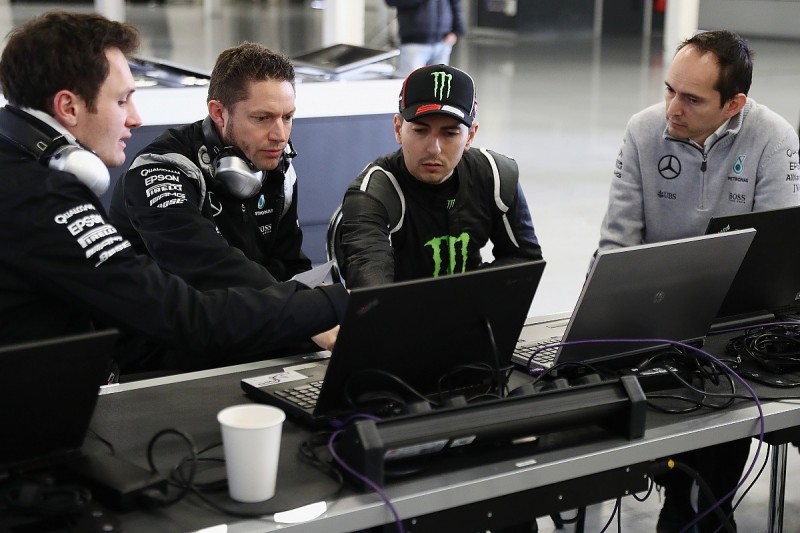 Lorenzo impressed the Mercedes engineers during his F1 test, but reckoned it is easier for motorcycle riders to be quick on four wheels rather than the other way round.

"[A driver on a MotoGP bike] would be much further from the good lap times than me in the Formula 1 car," he said.

"In a Formula 1 car you feel protected by the car and you know that if you crash your body is not going to impact the ground.

"On the bike the balance is much more important because you have to balance the bike or you crash.

"In the car you are more or less in the same position always and it's all about the sensibility on the steering wheel and the throttle and the brake.

"On the bike, you have the sensibility of the hands but also all your body needs to move and your body weight is very important for the lap time and the result."

How riding a MotoGP bike has changed