Marquez led most of the session, but elected not to use a soft rear tyre in the closing minutes and then crashed at the Dry Sac right-hander.

Having missed out on the top spot in first practice by just 0.007 seconds, Marquez took until his third flying lap to surpass Dovizioso's morning benchmark early on - by virtue of a 1m39.028s lap.

He followed that up with a 1m38.863s, and ended the run leading a Honda 1-2-3, ahead of works team-mate Dani Pedrosa and Crutchlow.

It took another half an hour before another rider, Tech3 Yamaha's Johann Zarco, put on new tyres to join Marquez in the sub-1m39s margin - and this was immediately followed by Crutchlow doing likewise to claim the top spot with a 1m38.749s effort.

Zarco then went half a tenth quicker than the LCR man, only for Crutchlow to immediately reclaim first place on a 1m38.614s. 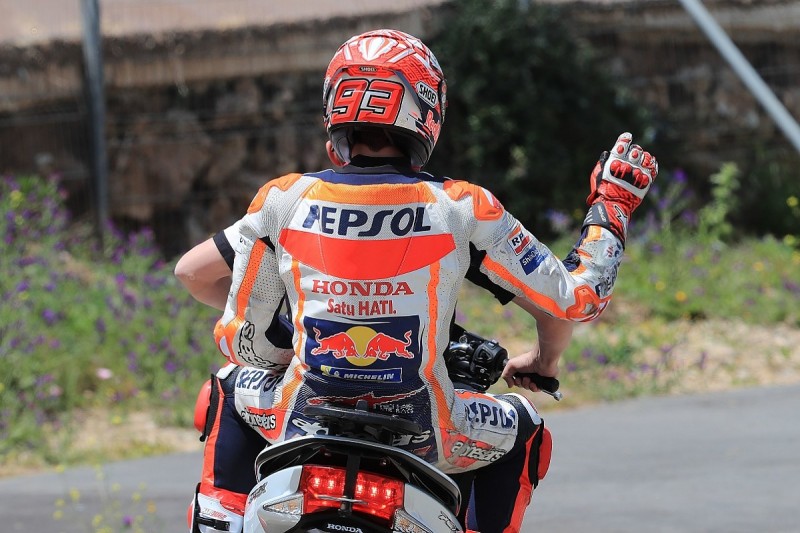 But his lead was still under threat from Pedrosa, who, after coming up just 0.028s short of Crutchlow on his penultimate effort, was up on the Briton's lap after three sectors at the chequered flag - only to lose out in the end.

Zarco settled for third, 0.004s ahead of Suzuki's Andrea Iannone, with the top four split by less than a tenth.

Despite crashing, Marquez wound up in fifth, a quarter of a second off the pace but around two tenths up on Ducati trio Dovizioso, Jorge Lorenzo and Pramac privateer Jack Miller.

Yamaha works riders Valentino Rossi and Maverick Vinales made up the top 10, but Vinales is not currently on course to claim an automatic Q2 spot - as his time was slower than the practice one effort of KTM's Pol Espargaro.