Aleix Espargaro says Aprilia’s first MotoGP front row start in the modern era was “not a huge surprise” to him, after he qualified third for the German Grand Prix.

The 2021 Aprilia MotoGP bike has proven to be the marque’s best of the modern four-stroke era, which began back in 2002, with Espargaro consistently scoring top eight results this season.

Aprilia hasn’t had a front row start in the premier class since Jeremy McWilliams was on pole for the 500cc race in Australia, with Espargaro ending that drought with third at the Sachsenring on Saturday.

Though this result has been a long time coming, Espargaro feels Aprilia has been threatening it all season and reckons a first top five for Aprilia in the MotoGP era on Sunday is “realistic”. 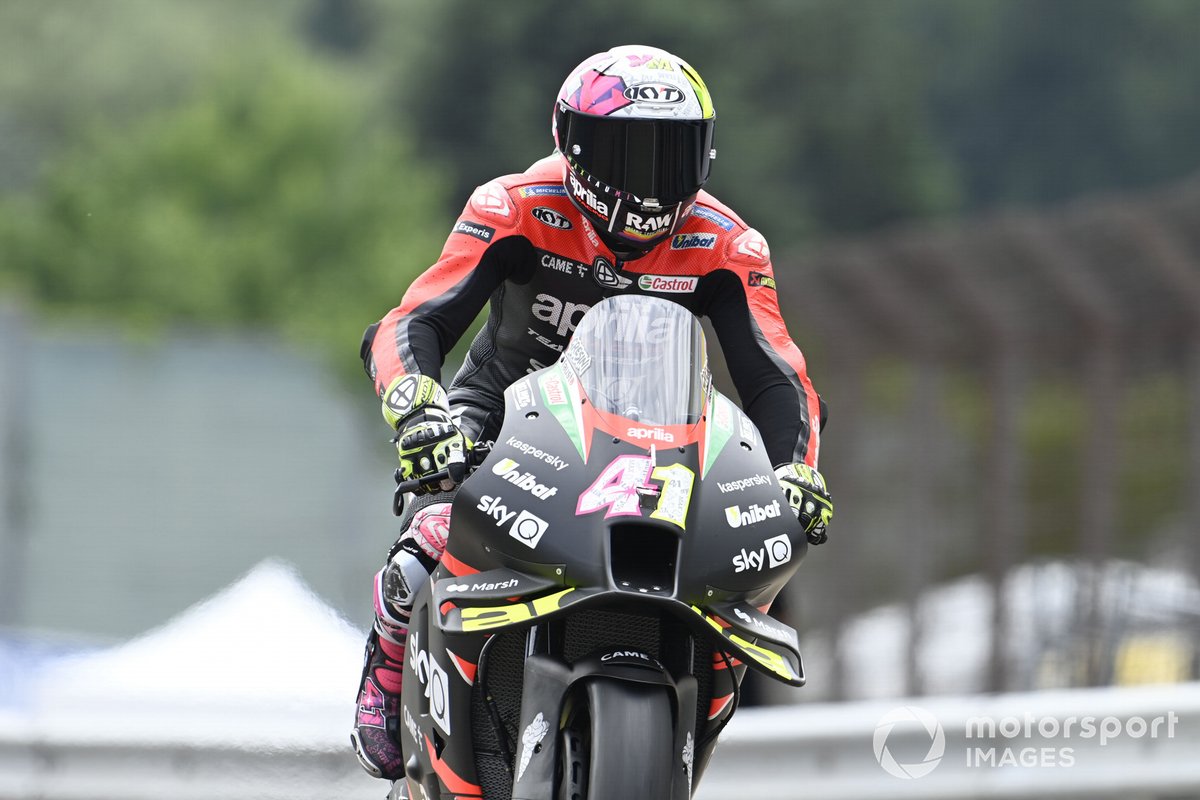 “Obviously, I’m very happy to finish today in first row, but today I would say it like this: it’s not a huge surprise because we’ve been very close in the previous races, not far from the fastest guy on Saturday in many circuits,” Espargaro said.

“So, it allows me to be fast more or less in every circuit, so obviously I’m very proud because I knew in this circuit we had a very good chance.

“For the moment I am enjoying riding here in Sachsenring, feeling good with the bike.

“And tomorrow you never know, anything can happen on a MotoGP Sunday.

“There is no big difference, maybe Fabio and Oliveira have really good pace, but we know how fast the Ducatis are in the races, also the Suzukis.

“Anything can happen, but we are there, we have not bad pace, we are strong.

“I think top five is realistic and everything can happen. I will try to hold there from the beginning and see how far I can go.”

Espargaro also believes this result proves the Aprilia is now a “serious” bike in MotoGP.

“But anyway, to finish in the parc ferme, to see everyone from Aprilia, all my guys there smiling and happy, this makes me very, very proud.

“This is the most important thing today. At the end, starting from second, third, fourth, fifth is not a big difference even if it’s important here in Sachsenring because it’s not an easy circuit to overtake on.

“But to give a nice moment to all of my people, this makes me very, very happy.

“I think we are showing to everybody that Aprilia is a serious bike, it’s improving, getting closer to the top guys in every single circuit.

“So, I’m happy and for sure tomorrow it’s going to be a little bit easier starting from front row.”