Aprilia has announced it has secured the services of Aleix Espargaro for at least two more years, beginning with the 2021 MotoGP season

The elder Espargaro brother joined the Italian manufacturer in 2017 after losing his Suzuki ride to Andrea Iannone, and scored Aprilia's joint-best ever result of sixth on his debut on the RS-GP in that year's Qatar Grand Prix.

Espargaro has proven to be a major asset to Aprilia in the seasons since, and has played a major role in the RS-GP's radical overhaul for the 2020 campaign.

Confirming to Autosport a fortnight ago that a new deal with Aprilia was close, Espargaro's commitment to the Italian marque was announced on Tuesday.

"I am happy about this confirmation," said Espargaro.

"The human aspect is extremely important for me, and in four seasons, Aprilia has become my second family, so with this contract, which is certainly the most important of my career, they demonstrated that I am at the centre of this project.

"On a technical level, the growth in recent months convinced me, with the arrival of many reinforcements and the début of the 2020 RS-GP, which did so well in the tests.

"I feel like we need to finish the job we started over the winter. I can't wait to get back together with my entire team and race with the new bike, to take this project where it deserves to be."

Espargaro admitted to Autosport that this contract would likely be his last in MotoGP, but there is now a desire from both parties to perhaps extend their collaboration until 2024. 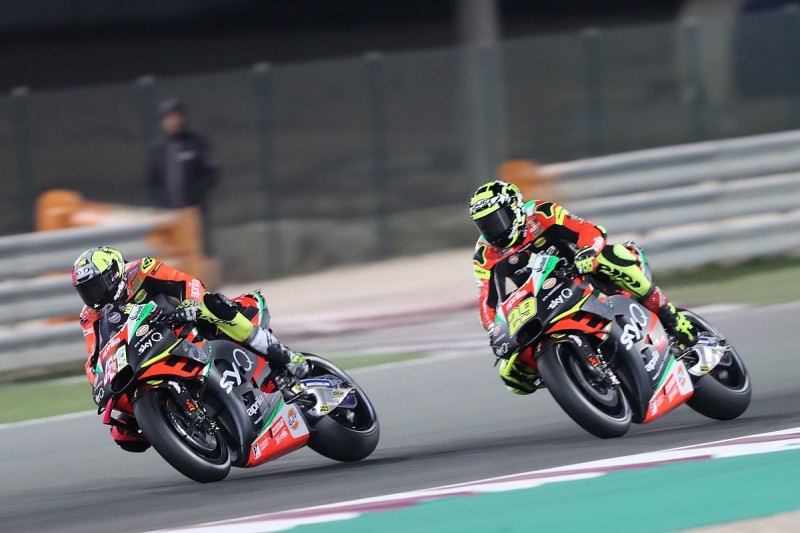 The identity of Espargaro's team-mate remains unknown at this point, with Iannone currently awaiting to appeal his 18-month ban for a doping violation late last year.

Aprilia has publicly backed Iannone and has repeatedly insisted its desire to retain the Italian.

However, it is beginning to look more likely that outgoing Ducati race winner Danilo Petrucci will be offered a deal from Aprilia.

This latest move in the rider market comes in a busy week for the Espargaro family, after Autosport reported last week that Pol Espargaro will be leaving KTM for Honda at the end of the year.

It is thought Alex Marquez, who is yet to actually race the factory Honda, will be moved to LCR with full works support.

With the Idemitsu-backed Takaaki Nakagami's side of the LCR garage specifically set up for a Japanese rider, Cal Crutchlow will most likely be moved aside to accommodate Marquez.

With options outside of LCR limited, Crutchlow - having made a U-turn on his outlook earlier this year - could be heading for retirement in 2021 after all.

Though talks have been slow due to disagreement over money, Andrea Dovizioso is expected remain with Ducati despite links to KTM in the wake of Espargaro's impending exit.

Why Espargaro signing isn't a disaster for Alex Marquez