Ducati has picked Danilo Petrucci as Honda-bound Jorge Lorenzo's replacement at its factory MotoGP squad for the 2019 season, Autosport has learned

It emerged earlier on Tuesday that Honda will drop Dani Pedrosa at the end of 2018 after 13 seasons, with Lorenzo set to leave Ducati to replace him.

The decision to replace Lorenzo with Petrucci was made personally by Ducati CEO Claudio Domenicali.

It is understood some senior Ducati figures were keen to give Lorenzo more time before making a final decision, especially as the team's option on Pramac rider Petrucci expires at the end of June.

But a two-year agreement for Petrucci to step up to the works team alongside Andrea Dovizioso was reached last weekend at Mugello - where Lorenzo secured his first victory as a Ducati rider. 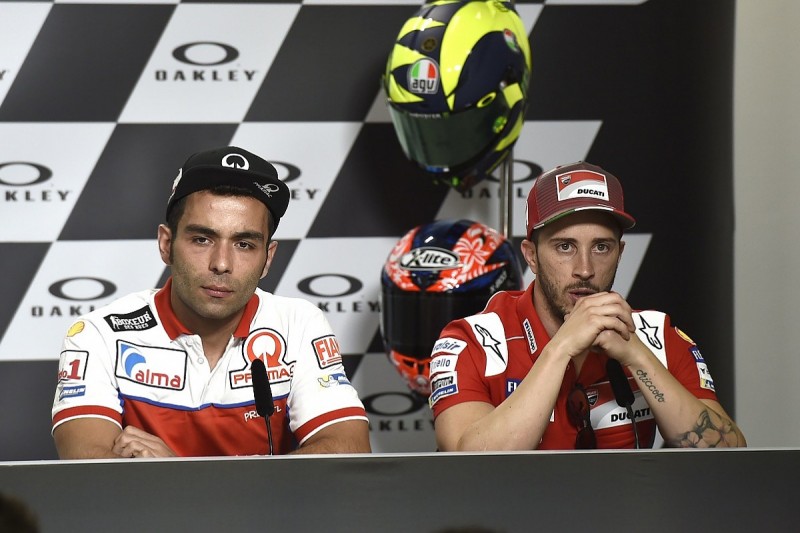 The other contender to replace Lorenzo had been Petrucci's current team-mate Jack Miller, who will instead remain at Pramac in 2019 alongside Moto2 championship leader Francesco Bagnaia.

Petrucci had a firm offer on the table for Aprilia, but that seat is now likely to go to Andrea Iannone, who confirmed ahead of the Mugello weekend he would be leaving Suzuki at the end of 2018.

After strongly hinting his tenure at Ducati was coming to an end after his Mugello win, Lorenzo subsequently clarified that the relationship between the two parties is "over".

"My story with Ducati is over, it's a question of self-esteem," Lorenzo said. "My future is already decided and this result will not change it.

"A part of me is sad because I know that with this bike I could have fought to be a world champion, which is why I came here. Now it's too late. There is nothing to be done.

"I kept telling people inside the team to believe in me, to bring me what I asked for. They have done it, but too late.

"I have the impression that Gigi [Dall'Igna, technical boss], Paolo [Ciabatti, sporting director] and Davide [Tardozzi, team manager] wanted me to stay. But I do not hold a grudge."

It is believed Lorenzo secured the Honda deal before Ducati made a final decision not to keep him, but he had also been working on a potential satellite Yamaha option in anticipation of losing his current ride.

The satellite Yamaha project could still go ahead, with Pedrosa now an option there.

Marc VDS had been expected to replace Tech3 as Yamaha's satellite outfit next year, but question marks remain over its MotoGP future following Michael Bartholemy's acrimonious departure from the team.

Malaysian oil giant Petronas has been linked with taking over the vacated Marc VDS grid slots, but there is also the potential for it to link up with the Angel Nieto (formerly Aspar) team.