Cal Crutchlow claims he has "exactly the same speed" as 2017 MotoGP runner-up Andrea Dovizioso, and says he would have been "really close" to the Italian had they remained team-mates

Crutchlow spent two seasons alongside Dovizioso, first at the Tech3 Yamaha team in 2012 before being reunited at the works Ducati squad in '14.

While Crutchlow was at Ducati for a single season before moving across to LCR Honda, Dovizioso stayed on board and reaped the benefits of the Desmosedici's improved competitiveness.

He finished runner-up to Marc Marquez in this year's standings, winning six races and taking the title fight down to the final race of the year at Valencia.

While praising Dovizioso and Ducati for their achievements in 2017, Crutchlow still believes he is at the same level in terms of "raw speed".

"The reason I left [Ducati] was [Andrea] Iannone already had a contract for the factory team," Crutchlow recalled.

"Even if I won the championship, I was out anyway, so why stay? The reason I left was not because what they were capable of doing.

"I knew what they were capable of doing and it was only a matter time until they came back to the front.

"Dovi has ridden fantastically all year, but he has a fantastic team around him and a good bike. 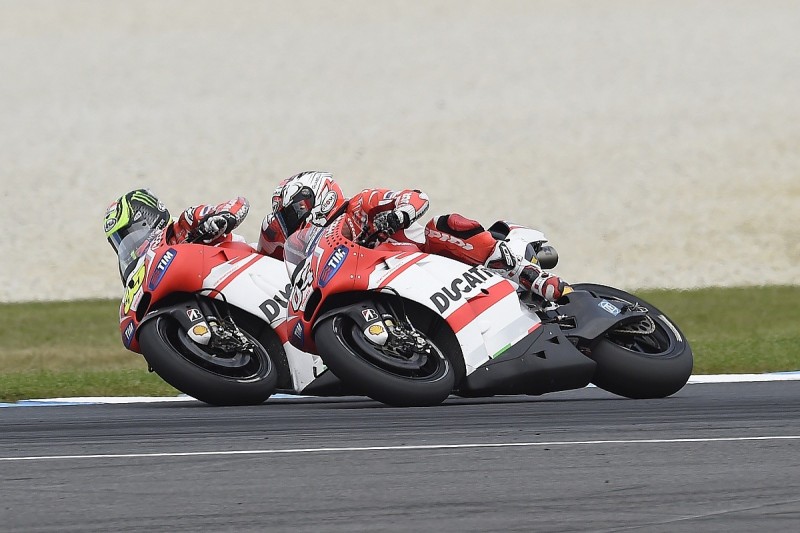 "If I stayed at Ducati, we would have been really close.

"I have to say he has made a step with his team and his bike this year. But raw speed, I'd say we were the same."

Crutchlow also praised the efforts of Danilo Petrucci, another rider who enjoyed his best MotoGP season to date this year with four podium finishes aboard a third 2017-spec Ducati.

He believes that crew chief Daniele Romagnoli, who worked with Crutchlow at Tech3 Yamaha and also Ducati from 2011-14, has been a major asset for the Pramac rider.

"What Petrucci has on his side big-time is Daniele Romagnoli," Crutchlow explained.

"He was my crew chief when I came from Superbike, he understands the feeling of a Superbike rider and how we explain things - completely different to a GP rider.

"Petrucci, I look at him as similar to me. He's not the most naturally talented guy in the world, but he digs in.

"On his bad days, he has really bad days. But on his good days, he's superb."

Dropping Bradley Smith for 2018 would have been unfair - KTM boss