The LCR Honda rider was new champion Marquez's closest challenger on Saturday at Phillip Island, 0.792 seconds adrift of the Spaniard, who successfully rolled the dice on slick tyres.

Crutchlow was fastest in Q1, in which a dry line rapidly emerged, and started Q2 on intermediate tyres, before throwing in a slick rear late.

However, he originally planned to start with slicks front and rear and believes that if he stuck to that he could have challenged the factory Honda rider.

"We're a little bit disappointed with the result," Crutchlow, who claimed his maiden MotoGP pole at Silverstone last month, said.

"I felt that we could've maybe stole pole today, if I was clever enough.

"Normally I'm the guy to put slicks on first, and I should've gone with gut instinct.

"After Q1, I said immediately, 'let's go with slicks'. And then I changed my mind, and it was the wrong decision.

"I lost a little bit of time, but I felt it was a good job with the front tyre I had.

"At the end of the day, Marc did a great lap, it's been tricky conditions all weekend."

The Briton was fastest in Friday's limited running, but had to contest the first phase of qualifying after missing the boat in Saturday morning's third practice session.

Crutchlow could only manage the 15th fastest time in that session, which was littered with rain showers. 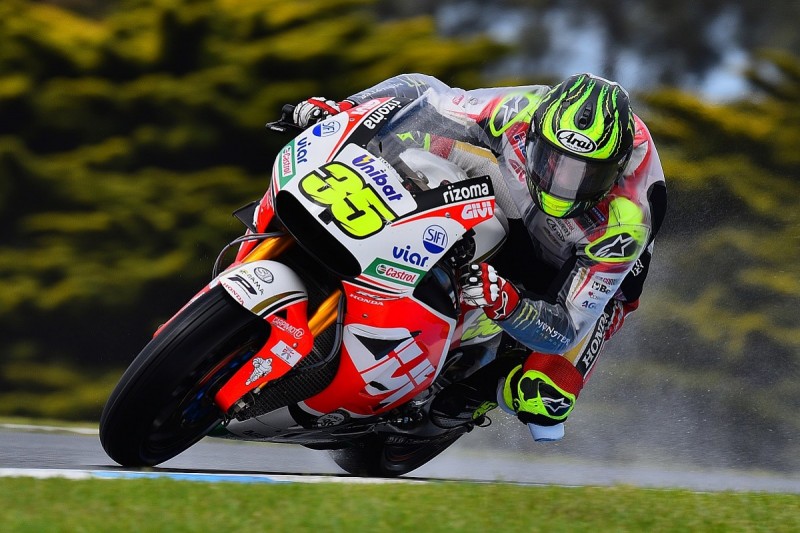 "Going through to Q1 I had the extra little bit of experience with the rain or the half-wet, half-dry, but we shouldn't have gone through to Q1 anyway," he said.

"It was a bit of a nightmare situation, I chose the wrong tyres at the wrong time in FP3, but I think my team did a good job.

"We have to look forward to tomorrow, it could be a complete lottery again."

Marquez started qualifying on intermediates, but pitted at the end of his initial outlap to change to slicks.

He emerged with five minutes of the 15 gone, with rain forecast to arrive in the second half.

While that did not eventuate, and Marquez lit up the timing screens with a string of fastest laps, he did fear being jumped late if anyone else successfully changed to fresher slicks.

"The forecast said there would be heavy rain in 10 minutes," he said.

"Everybody was pushing, but when I went out, I saw the track was completely dry.

"I took the risk to go in, lost maybe three minutes but put the correct tyre on and pushed at 100% for three, four laps.

"I was a little bit worried, because I said, 'now if somebody goes in put new tyres they can do a better lap', but in the end it was enough."