Wet weather essentially wrote off Friday's running at Phillip Island, with Lorenzo 19th and 4.694 seconds off the pace set in the only completed session.

Conditions did improve on Saturday, but third and fourth practice were still interrupted by rain showers, and the Spaniard's 2016 woes in cold and wet conditions continued.

Lorenzo was 21st and last in third practice, which meant he had to contest Q1, but did more wet-weather running than most in fourth practice.

While Lorenzo made it through Q1 at the expense of the likes of Yamaha team-mate Valentino Rossi and Suzuki's Maverick Vinales, he was 12th and last in Q2, 6.651s off the pace set by Marc Marquez despite a late switch to slick tyres on the dry surface.

The three-time MotoGP champion surmised the day as "a big disaster".

"We reached the second qualifying luckily, because some of the riders put in the mixed tyres when the track wasn't ready yet," he said.

"That's why we were able to finish in second and get through to Q2.

"But in that session with the slicks was probably the worst scenario to try to make the step I needed in these difficult and dangerous conditions.

"We've not been lucky with the weather; too much rain, then no rain, there was wind and it's been very cold.

"Considering all negative circumstances today it was not possible for me to be fast." 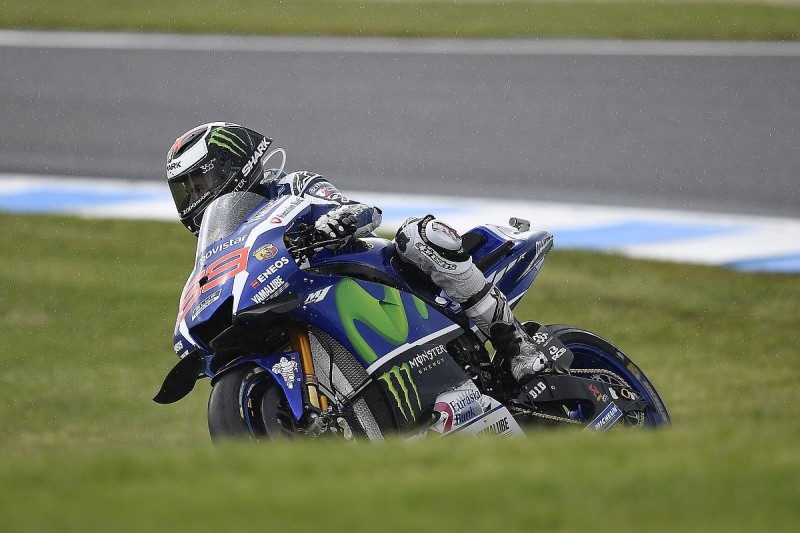 Lowly FP3 results meant both Yamaha riders contested the first phase of qualifying for the first time since the format was introduced in 2013.

Rossi qualified three places behind Lorenzo in 15th, having failed to progress to Q2, with a late switch from wets to intermediates failing to pay off, and their struggles came as a surprise to Marquez.

"Jorge, it looks like he's struggling in these kind of conditions but in Q1 he did a good lap on wet tyres to go into Q2," the polesitter said.

"Then he was struggling again in Q2, but you never know.

"Maybe they will go tomorrow out and they will be the fastest guys because they have a lot of talent, we know."

"It is surprising, sure, to see them so far back, but it can happen to anybody in the world," he said.

"Jorge we know is not pushing very much in these conditions at the moment.

"I think Valentino just got caught out with the timing. It was a really strange Q1 with how fast the track was drying.

"I wouldn't be surprised if I got passed by one of them in the race at some point."