The LCR Honda rider was second in the order to the rampant Marc Marquez entering the final minutes, but then crashed at Turn 1 as riders settled into their second runs.

He dropped back to the middle of the second row as others improved and will start fifth on Sunday, between Ducati's Andrea Dovizioso and Yamaha's Valentino Rossi.

However he feels a second front-row start of the season following his pole at Silverstone went begging.

"I'm so pissed off," he said. "It was, to me, a real missed opportunity to be on the front row.

"I made a big mistake on my fastest lap of the session in Turns 7 and 8. I made it through Turn 7 and then decided I was going to make it all up in Turn 8 and made another one.

"Then I came in, changed the tyre and felt really confident, because I knew I could gain three tenths in that sector.

"I scrapped the first lap because I had no heat in the tyre and I had Dovi behind me and didn't want him in my slipstream, and Pol [Espargaro].

"I was four or five seconds back from them and said 'OK, now I'll start to push' - [but] as soon as I did that, I crashed.

"I'm just disappointed that we missed the opportunity to be on the front row; it was quite an easy front row for me today."

Having been strong throughout practice, Crutchlow felt starting near Dovizioso will hurt his chances to push for a podium early in the race.

"Why I'm so angry about qualifying is that I have Dovi next to me on the grid and I have absolutely zero chance," he said.

"I needed to get away with the leaders to have a chance to really fight for the podium.

"And if Dovi slipstreams me on the back straight I'm going to get held up for the rest of the lap.

"That's our situation at the moment. Our bike's not fast enough." 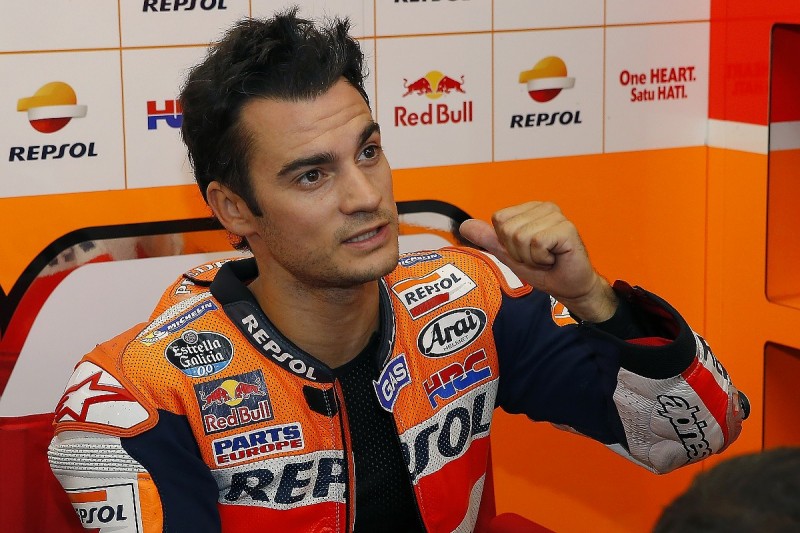 Marquez's factory Honda team-mate Dani Pedrosa was fastest on Friday, but like Crutchlow crashed at the end of qualifying, at Turn 15.

He will start seventh, albeit one spot better than he did at Misano a fortnight ago to take his first win of the season.

"Unfortunately I missed the last lap to be on the front row, which would have been important," he said.

"But now we have to forget that and focus on tomorrow - trying to do a good start and a good first lap.

"Try to overtake the riders in front, they don't have the same pace."

Rossi: Marquez will be 'very difficult' to beat in Aragon race