Rossi: Marquez will be 'very difficult' to beat in Aragon race

Honda riders have dominated the weekend, with Marquez topping two practice sessions and factory team-mate Dani Pedrosa the other.

Marquez then claimed pole position by 0.631 seconds, despite not improving on his second run in qualifying.

Even more imposing was his pace and consistency in the fourth practice session - considered the primary form guide for the race - which Marquez finished with a 0.746s buffer over second-placed Rossi.

The Yamaha rider, second in the championship to Marquez, will start sixth and is targeting a podium rather than victory.

"Marquez is very strong and he's the guy that clearly has the best pace and he will start also from pole position," Rossi said.

"We need to concentrate to make the best and fight for all of the race to try to arrive on the podium.

"I think that to beat Marquez will be very, very difficult.

"In practice, I was not so bad, with the hard tyres for the pace, I was in second place, so this is quite good.

"But we need to make better, we need to work a lot and try to improve the pace, especially to try to be fast from the beginning and also to keep a good rhythm for all of the race."

After taking his sixth pole position of the season, Marquez said he felt his pace and rhythm in fourth practice was "most important thing".

However, he believes slightly cooler conditions forecast for Sunday, and the outside chance of rain, could change things.

"Tomorrow we will see because it looks like it will be a little bit cloudy, so the temperatures should drop a little bit," he said.

"My question mark is over the front tyres, because with the hard one and this temperature it's OK, but how it works when [the temperature] is low, we will see.

"But I feel well with the bike and ready for the race and this is one of the circuits on the calendar where I can attack a little bit more." 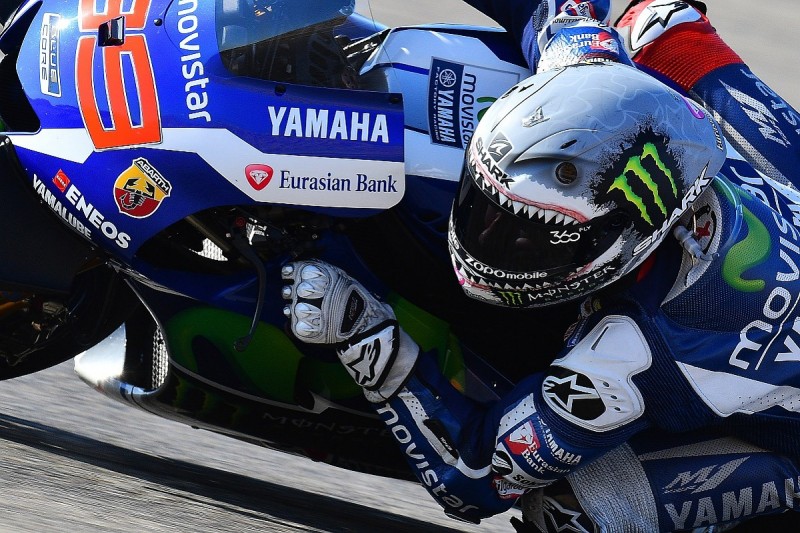 He says the nature of past races at Aragon and this MotoGP season - with eight different winners in the last eight races - means nothing is a foregone conclusion.

"For sure it's difficult. Now he looks like he has one step or even two compared to the others," Lorenzo said of Marquez.

"But in 2014 I was in the worst scenario for the year in qualifying and practice, and I won the race.

"Obviously it was a strange race with flag-to-flag, we had to change bike mid-race, but this gave me the chance to win that maybe in normal conditions I didn't have.

"In MotoGP, especially this year, everything is possible."