The winner of the Australian GP seven days earlier, Crutchlow was at the rear of the five-rider lead back with eight laps remaining at Sepang when he came unstuck at Turn 2.

It capped a dramatic weekend for Crutchlow, who crashed in practice and qualifying on Saturday and raced with a broken metacarpal in his left hand.

"I'm a little bit sore after what was a big crash," he said.

"It wasn't fast, in fact it was quite slow but I high-sided off throttle.

"Marc [Marquez] almost had the same the lap before but he managed to stay on - he had the luck of landing back on the bike.

"I thought 'don't do what Marc did', but I nearly ended up on the moon.

"I landed completely on my face and was a bit disorientated, but then was OK.

"I have some pain in my big toe and my foot, and in my hand which is broken from the qualifying crash.

"It was impossible to ride the bike again." 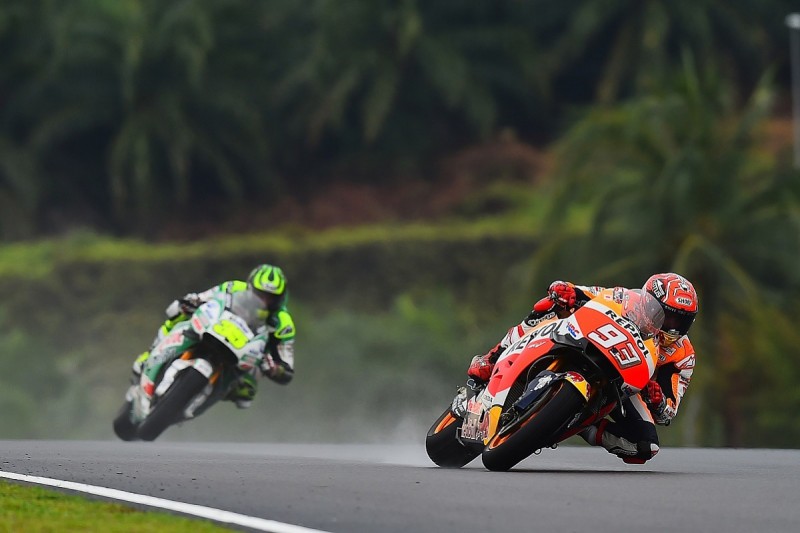 Crutchlow's accident was the first of three in the space of two laps, with Marquez falling at Turn 11 later on lap 12, before Ducati's Andrea Iannone - who led a race-high nine laps - went down at Turn 9 the next time around.

That left the lead pack as Valentino Rossi and eventual victor Andrea Dovizioso, while Jorge Lorenzo wound up third, having been 4.319s behind Crutchlow when he crashed.

"It was a shame because it was a definite podium opportunity, but I was struggling with the acceleration," the Briton said.

"We need to improve how the traction control works because we just weren't competitive enough in this area, and myself and Marc had to brake 'hot' all the time to make up for this.

"I tried my best and it didn't work this time, but I'm most disappointed for my team because to spend the week here and get any points is a real shame.

"We go away happy enough because of recent results but we had to try today, and we did."

Having finished fifth at Motegi before taking his second MotoGP victory at Phillip Island, Crutchlow will start next month's Valencia finale seventh in the championship.