Cal Crutchlow found riding with his finger injury "difficult" and "uncomfortable" in Misano MotoGP's Friday practice sessions, but said he did not suffer any real pain

The LCR Honda rider admitted on Thursday he was not sure if he would be able to ride this weekend after slicing his left index finger while cutting parmesan cheese earlier in the week.

Crutchlow had surgery to reattach a severed tendon and rode a motorcycle during a promotional event organised by LCR sponsor Castrol at Barcelona on Wednesday.

Wearing a custom-made splint, he then set the fourth-fastest time in first practice and was sixth-fastest in practice two at Misano on Friday.

"It was uncomfortable," said Crutchlow. "But to say I was in any pain, I would be lying.

"I was not in so much pain, it was just difficult to ride the bike.

"What I'm used to doing normally, and when I rode the other day in Barcelona, I had the finger pointing down, because I thought it was not comfortable with the finger up.

"But now all I'm doing is pointing the finger up. It's uncomfortable because it's in this splint, but otherwise I felt OK on the bike." 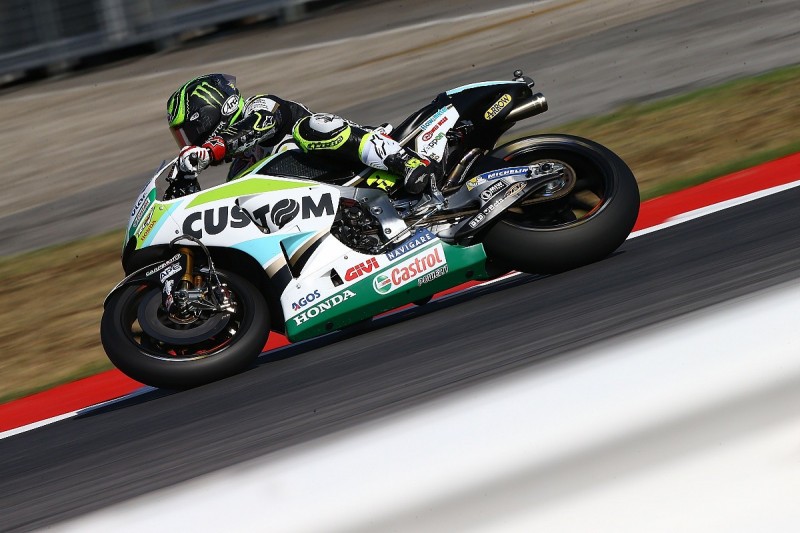 Crutchlow emerged unscathed from a crash at the Turn 15 left-hander near the end of an out-lap on the hard front tyre.

"It's really strange, I've raced this tyre with 12-14 degrees less track temperature and it's been no problem," he explained.

"Marc [Marquez] used it this afternoon, came in after five laps and said he can't use it, it's completely at the limit.

"I'm sorry to my team for the crash because it was really unfortunate. I've been feeling really good on the bike, and we didn't need that lost time.

"But I went back out and went faster, and then faster again."

In addition to Marquez and Crutchlow crashing at the end of the lap, three riders fell exiting Turn 1 during the second session, with Sam Lowes and Jack Miller crashing in quick succession, and Alex Rins following suit later on.

Crutchlow said it was "so strange, because the track feels quite grippy".

He added: "Everyone says the track feeling is bad, not so much grip, but I felt OK.

"I felt the limit was my condition on the bike, not the limit of the track."