Francesco Bagnaia says Ducati has not made him feel like a number two rider in its factory MotoGP squad, despite team-mate Jack Miller being tipped as an early title favourite.

Ducati has refreshed its factory line-up for 2021, bringing in former Pramac pair Miller and Bagnaia to replace the ousted Andrea Dovizioso and Danilo Petrucci.

Miller ended pre-season testing fastest of all with an unofficial lap record in Qatar of 1m53.183s, while 2018 Moto2 champion Bagnaia was just 0.281s behind him in fifth.

Many in the MotoGP paddock have already pegged Miller as one of the main threats to Joan Mir’s crown in 2021, a tag Miller says he enjoys, but Bagnaia notes this isn’t reflected in how he is being treated within Ducati.

The Italian scored a first podium last season with second at Misano, his first race back after recovering from a broken leg sustained in a crash at Brno, but had a scrappy end to the season as he crashed out in four of the final five races.

“I’m feeling at the same level of Jack inside of the team,” Bagnaia said following testing in Qatar.

“I don’t feel that he is in front of me in the line of Ducati.

“For sure for the result he has done last year in the last races, for sure he will start with more pressure maybe.

“But Ducati never made me feel like I’m second in this team at the moment.” 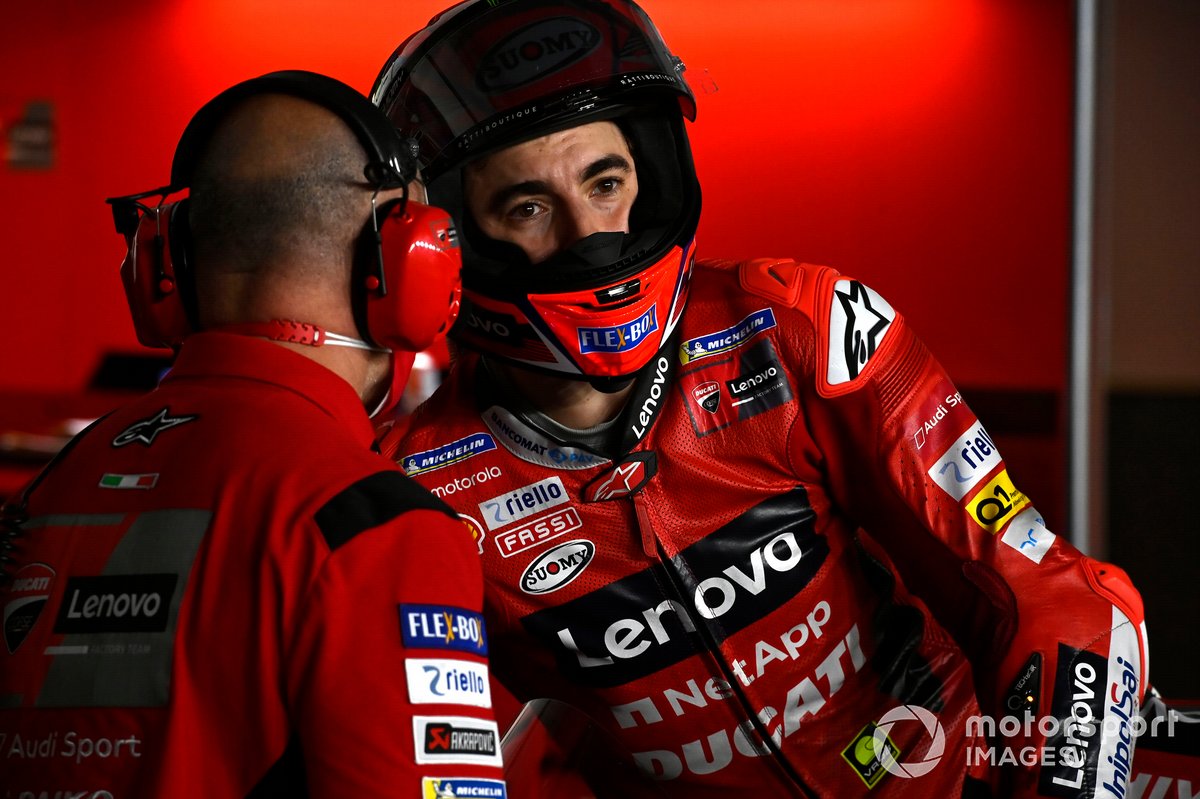 When asked for his expectations for his first season as a factory MotoGP rider, Bagnaia said he is targeting top five finishes, noting that his modest predictions are a result of his difficult end to 2020.

“Looking at my final races of last year, I prefer to say that the top five will be my objective because I finished the season struggling a lot and I prefer to remain thinking on the top five and not for more,” he explained.

“So, my pace is very good, so I say top five, but we will see during the weekend.”

Bagnaia says he has “never felt so good” with his Ducati despite the changes to the GP21 being minimal over last year’s bike, which he was also quick on at the start of the campaign.

PLUS: What we learned from MotoGP pre-season testing in 2021

Explaining where his gains have come from, Bagnaia said: “My feeling with the bike is really high, maybe higher than last year when I was fast because I’m making things easier compared to last year.

“This test of last year was good for me, but this year I improved the pace by a second faster, and also my lap time of the time attack was as second faster. Also, I made a step with the confidence on the bike.

“I know that it’s very similar to the bike of last year, but I improved a lot maybe my riding style and my feeling with the bike.

"I’m very happy at this moment, because I’ve never felt so good with this bike.”