A week after qualifying 21st and finishing last at the Sachsenring in his worst-ever MotoGP weekend, Vinales has been in imperious form across the Assen round so far by topping all three practice sessions and easing straight through to Q2.

The forecasted rain for FP3 didn’t materialise on Saturday morning, firmly opening the door for improvements to be made on the combined order in deciding the direct Q2 entrants for qualifying.

Aprilia’s Aleix Espargaro was the first significant mover on the combined order, the Spaniard firing in a 1m33.442s to move up from seventh to fourth and go to top spot in the session.

Improvements on the combined order were numerous in the opening 10 minutes of the 45-minute session, though Vinales’ 1m33.072s from Friday remained untouched.

However, Vinales – who said on Friday he didn’t copy his team-mate’s settings as he said he would following his woeful German GP – moved the goalposts with 25 minutes to go with a 1m32.848s.

The Yamaha rider bettered this on his next lap to a 1m32.686s, before team-mate Quartararo edged ahead with a 1m32.597s.

With just over 11 minutes remaining, Vinales returned to the top of the order with a 1m32.336s, while world champion Joan Mir on the Suzuki leaped up to third behind him.

Vinales’s 1m32.336s wouldn’t be bettered through to the chequered flag and kept him on top of the standings, with a 1m32.533s late on for championship leader Quartararo cementing second. 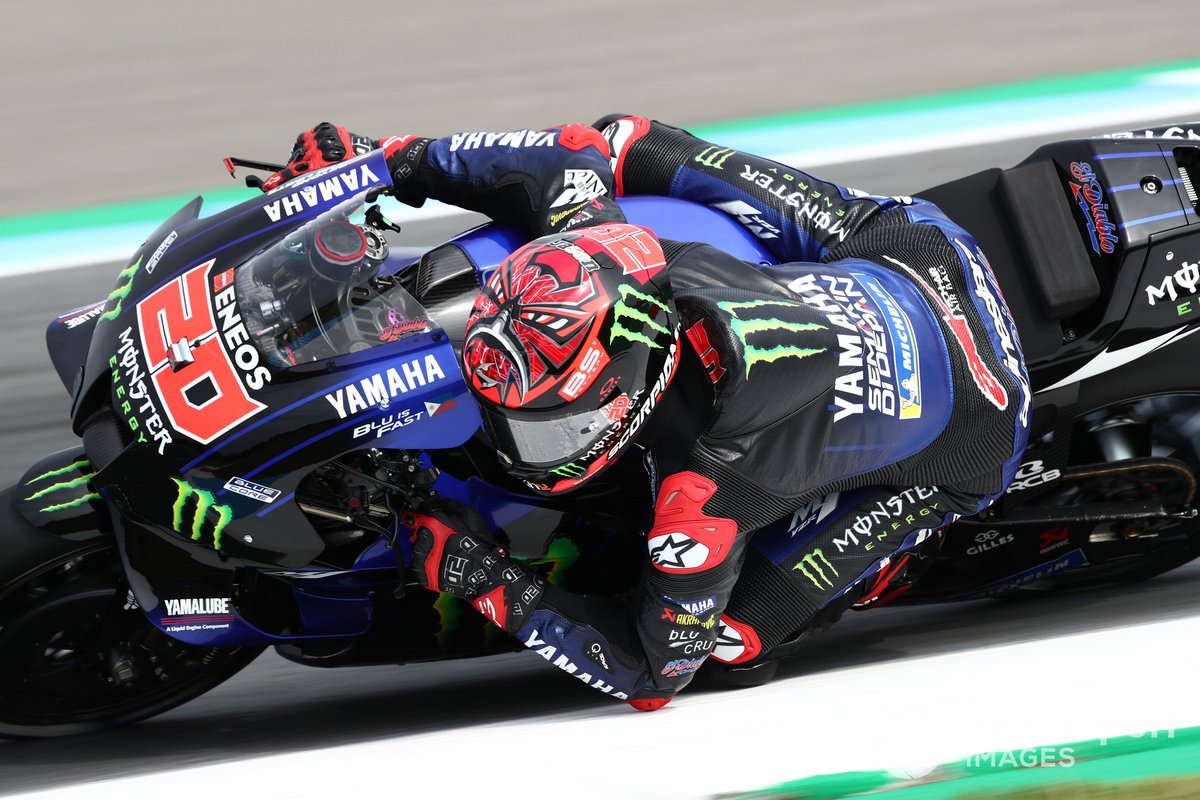 Honda’s Pol Espargaro has enjoyed a strong weekend on his RC213V at Assen and trialled the new chassis team-mate Marquez used on Friday.

The Spaniard has eased into Q2 with a 1m32.641s putting him third in FP3 ahead of Aprilia-mounted brother Aleix.

Both Suzuki riders showed encouraging one-lap pace on FP3, with Mir and team-mate Alex Rins fifth and sixth and safely into Q2 at the end of the morning session.

Takaaki Nakagami had numerous laps deleted for track limits violations, but hooked up a 1m32.853s at the death to jump up to seventh and into Q2 on his LRC Honda ahead of KTM’s Miguel Oliveira.

Valentino Rossi will make his fourth appearance in Q2 after ending FP3 ninth on his Petronas SRT Yamaha, with Jack Miller the only Ducati in Q2 currently after sneaking into 10th by just 0.031 seconds.

Miller’s entry to Q2 came at the expense of Pramac’s Johann Zarco, with a costly early crash leaving him in 11th ahead of Francesco Bagnaia on the other works team Ducati and the sister Pramac bike of Jorge Martin.

Martin was on course to get into Q2 with a strong lap at the end, but was baulked by the Avintia Ducati of Enea Bastianini in the final sector.

Factory Honda rider Marquez came into Saturday battered and bruised from his heavy crash in FP2 on Friday and will have to go through Q1 having ended FP3 15th on the combined times ahead of KTM’s Brad Binder.