© 2020 Autosport.  All rights reserved.
Previous / Quartararo baffled by "really bad feeling" on Yamaha
Next / Zarco: Penalty "not the end of the world"

Pol Espargaro admits he "still cannot really believe" the pace KTM has been showing in MotoGP in 2020, but wants to see how the bike stacks up against Marc Marquez.

The reigning world champion has been absent since breaking his right arm in a heavy crash during the season-opening Spanish Grand Prix at Jerez last month.

This is the first time in his MotoGP career that Marquez has missed races.

KTM has become a frontrunner in 2020, with Brad Binder securing both his and the bike's first win in a stunning performance at the Czech Republic GP and Espargaro showing enough pace for victory last week in the Austrian GP before the race was red-flagged for the huge incident between Franco Morbidelli and Johann Zarco.

Espargaro, who will move to Honda and become Marquez's team-mate in 2021, admits the step KTM took between last year and 2020 with the RC16 wasn't radical, but is unsure if KTM is "as good as its seems" given it is yet to go up against Marquez this season.

"I didn't feel we changed so many things to be as good as we are," Espargaro said on Friday at the Styrian GP after topping practice.

"Still we cannot really believe that we are so fast.

"I don't want to be negative, I'm positive always, but the best guy on the grid is not here.

"Marc is not here, and I would like to compare against the best one.

"He is not here, and I don't know what he would do because [Takaaki] Nakagami has been quite fast today [on the year-old LCR Honda] and Marc normally is faster than him. 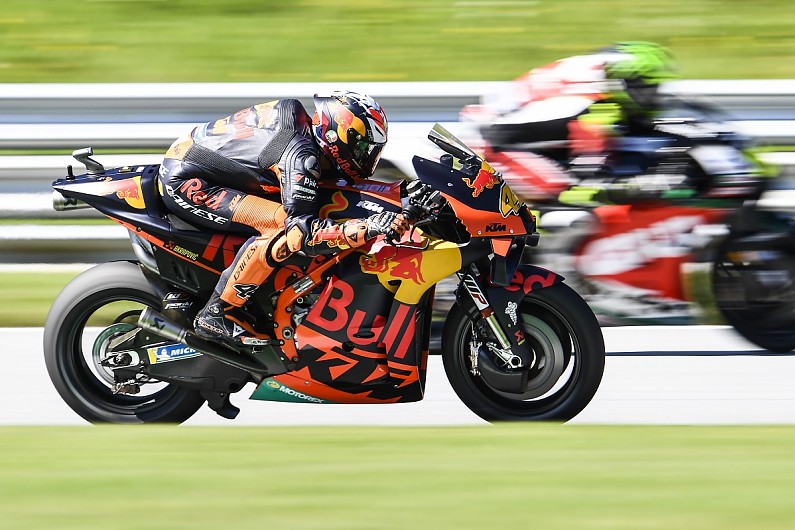 "We are very good, this is true, but are we as good as it seems? This is my question and I don't know.

"We have to go to more races and see how we are in different places, because for sure at Jerez we were not as good as in Czech Republic and as here. So, I just want to keep a little bit calm and keep the feet on the ground."

Espargaro's victory charge last week came unstuck because he ran out of his preferred medium rear tyres for the restart and was forced to run the soft, which he said was "weak".

His race ended in a collision with Tech3 KTM's Miguel Oliveira, which led to a controversial exchange of words - though both riders have since held talks to clear the air.

To avoid a repeat of what happened last Sunday in regards to the tyre, Espargaro confirmed he only used one medium in both practice sessions.

Share this article on Facebook Twitter LinkedIn Email
Previous / Quartararo baffled by "really bad feeling" on Yamaha
Next / Zarco: Penalty "not the end of the world"
© 2020 Autosport