Marquez stepped up to MotoGP in 2013 as reigning Moto2 champion, and has since won the title six times in the last seven years and tallied up 56 race victories.

In 2014, on his way to his second-successive championship, Marquez won an unprecedented 10 races in succession at the start of the campaign.

Well known for his hard training regime, which includes a large amount of time riding flat track and motocross bikes, Marquez has "raised the bar" according to Quartararo - who admits he has modeled his training regime after the world champion's.

"The level of demand in training that there is now in the World Championship was established by Marc, he raised the bar," Quartararo told Autosport.

"Both in Moto3, Moto2 and obviously in MotoGP.

"Before Marquez debuted in 2013, nobody trained as much as now.

"Marc won the first ten races of 2014 and we saw how he continued training to the death.

"Then everyone changed the switch. I saw it when I was in Moto3 and that motivated me even more. 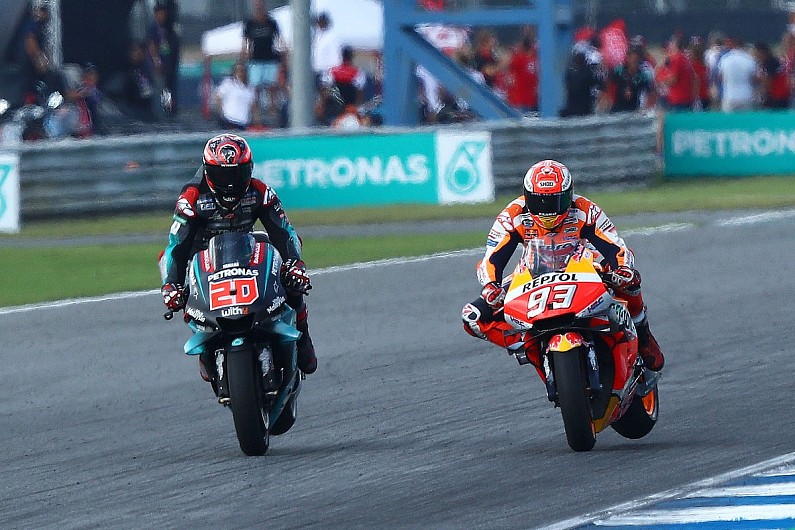 In recent weeks, as coronavirus lockdown restrictions have been eased across Europe, many riders have been doing tracks days on street bikes ahead of the planned return to racing at Jerez next month.

Quartararo typically avoids track days as the readjustment from a street bike to his Yamaha MotoGP bike can be "strange", though he will seek to spend at least one day on a circuit prior the first race in order to "get the brain and eyes" used to the speed again.

"I train a lot with field bikes and that works very well for me physically," the Petronas SRT rider told Autosport.

"You have to be very strong to endure a 20 minute motocross race, in which the arms, forearms and legs are used a lot.

"That is more or less what you use a MotoGP. When I get on a street bike and then take to the M1, I have a strange feeling.

"Before going to Jerez for the first race I would like to ride one day on a circuit, as a transition from dirt to asphalt, to get the brain and eyes used to it.

"[But] I don't want to get used to a speed bike and then the M1 seems strange to me."

A few riders have already ridden their MotoGP challengers at private tests, with Pol Espargaro putting some miles on his KTM at the Red Bull Ring late last month.

Bradley Smith - who may well be called into action to replace the banned Andrea Iannone - rode the Aprilia at Misano last week, with a private group test organised by Ducati set to take place at the San Marino Grand Prix venue on 23-24 June.