MotoGP has unveiled a 13-round European calendar for the coronavirus-delayed 2020 season, with options for overseas races at the end of the year tentatively outlined

The outbreak of coronavirus has forced the current MotoGP campaign into a hiatus dating back to the aborted Qatar Grand Prix at the start of March, with all rounds since then scrubbed from the original schedule.

MotoGP promoters Dorna Sports announced in April its plans to resume the season with back-to-back races at Jerez on 19 and 26 July pending government approval in Spain.

Those dates for the Spanish GP and GP of Andalusia have now been firmed up in the calendar unveiled on Thursday.

The Czech Grand Prix at Brno will be round three on 9 August, with just a single race at the circuit, before back-to-back races in Austria on 16 and 23 August - the first of two triple-headers in the schedule.

Misano will host two races on 13 and 20 September, with the Catalan and French GPs following on 27 September and 11 October.

A week after that is the rescheduled French GP at Le Mans will come two races at Aragon on 18 and 25 October. 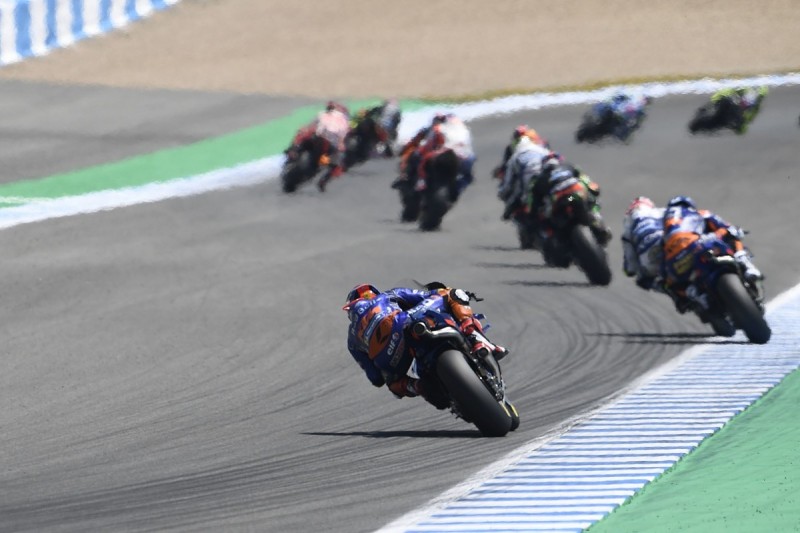 A double-header at Valencia on 8 and 15 November brings the European calendar to a close and the season itself should MotoGP be unable to take in any overseas events this year.

From the remaining races yet to be cancelled, MotoGP does have the options of the Malaysian, Thailand, Americas and Argentine GPs.

Dorna has previously stated that a decision on whether it will stage overseas races this year will be made in July.

Currently, the opening Jerez race, the Czech GP, the first Austrian race and the first Misano event clash with Formula 1 rounds - the latter oddly clashing with the Italian GP at Monza.

The season will finish no later than 13 December, with a max of 17 events (including the Qatar round, which did host Moto2 and Moto3).

Quartararo: Marquez has "raised the bar" in terms of fitness in MotoGP