The coronavirus pandemic has now decimated the first half of the 2020 MotoGP calendar, as Assen has now confirmed this year's Dutch TT has been postponed.

The outbreak of COVID-19 forced the opening round in Qatar to be cancelled back in March, with the following eight rounds in Thailand, America, Argentina, Spain, France, Italy, Barcelona and Germany postponed.

A recent ban on mass gatherings to the end of August in the Netherlands as part of continued social distancing measures to quell the spread of the virus put the 28 June Dutch TT - the de facto first race of the season - under threat.

How MotoGP can solve its Gordian Knot calendar problem

On Thursday, the TT Circuit Assen confirmed in a statement that the 90th running of the Dutch TT would be postponed to the Autumn or cancelled.

"Unfortunately, the recent measures announced by the government mean that the 90th TT Assen will be postponed until the autumn or until next season," the statement read.

"We are in discussions with the [MotoGP] organiser Dorna Sports about this.

"Tickets that have already been purchased will remain valid. 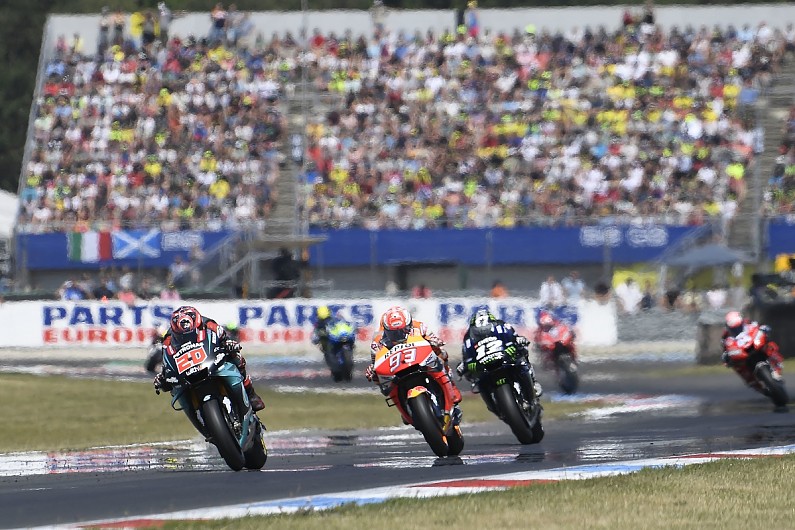 "Of course, the TT Circuit Assen organisation is very disappointed, but despite that we do fully support the government's decision.

"The health of the fans and all other parties involved is our highest priority.

"Stay safe and we hope to see you soon at TT Circuit Assen."

The earliest the season can now start is 12 July in Finland for the inaugural race at the newly-built KymiRing.

However, Dorna CEO Carmelo Ezpeleta recently confirmed the first Finnish Grand Prix since 1982 will likely not go ahead this year as planned as the circuit cannot be approved amid the current crisis.

Ezpeleta also says he'd be "delighted" with a 10-round championship this year, and says the best case scenario would be to begin in August with the Czech GP.

To keep the teams, afloat Dorna recently announced a €9.075million financial aid package for the independent MotoGP teams - and KTM - plus all Moto2 and Moto3 squads to be rolled out for the next three months.

As part of cost saving measures, MotoGP agreed to freeze all development for the 2020 season, while 2020 engines and aerodynamic development for 2021 will be frozen for all non-concession (Honda, Yamaha, Ducati, Suzuki) manufacturers.

Ducati proposed the idea of a one-bike rule to the manufacturers in a recent teleconference, though this was rejected.