Johann Zarco could end up at Avintia in MotoGP next year despite dismissing the outfit as "not a top team" when rumours of a move first appeared last weekend.

Zarco quit KTM midway through a difficult campaign on the RC16, and has been riding in place of Takaaki Nakagami at LCR on the year-old Honda in the last three races of the season after KTM dropped him post-Misano.

The double Moto2 champion was one of the favourites to take the retiring Jorge Lorenzo's place at the works Honda team, and Zarco insisted staying with Honda was his priority.

When asked by Autosport on Saturday at Valencia if he was considering that ride, Zarco said he would rather return to Moto2 - where he has been linked with Marquez's Marc VDS seat - than ride for Avintia because of its poor performance.

Rumours then began to circulate that Zarco could take over Jack Miller's place at Pramac, with Miller pushing Danilo Petrucci out of the works squad.

This was a move seemingly backed by French Grand Prix organisers, though the money thought to be on offer was not enough to cover the financial penalty Ducati would suffer by breaking Petrucci's contract.

Ducati is willing to invest in the Avintia operation at a technical and engineering level for Zarco, though likely on a 2019-spec bike. 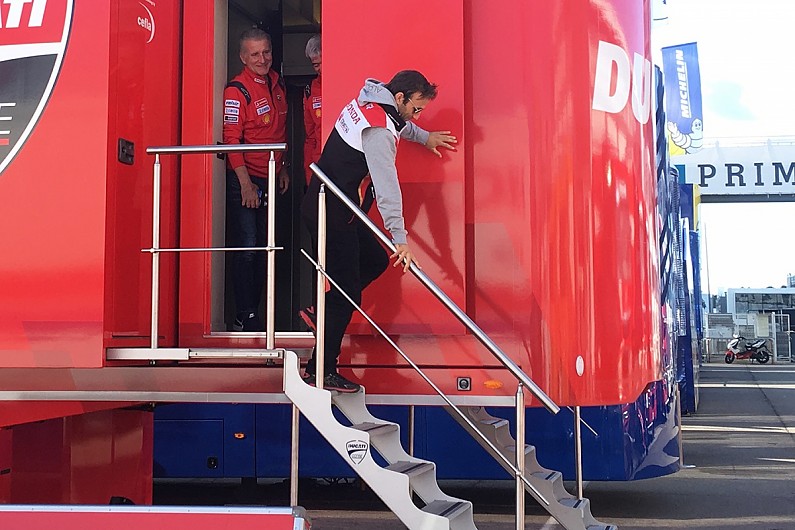 Having dismissed Avintia, Zarco was pictured by Autosport leaving Ducati's race office at the Ricardo Tormo circuit having reportedly had an hour-long meeting with the manufacturer's MotoGP bosses Paolo Ciabatti and Gigi Dall'Igna.

Ducati chiefs used the time to try to convince Zarco that he will have the necessary means behind him to have a competitive package at Avintia, at which he will likely replace Karel Abraham.

Tito Rabat signed a two-year extension with the Avintia squad earlier in the year.