Honda is close to signing Alex Marquez to join brother Marc at the works team for the 2020 MotoGP season in place of the retiring Jorge Lorenzo, Autosport has learned.

Triple MotoGP world champion Lorenzo announced on Thursday ahead of the Valencia Grand Prix he would be retiring after this weekend's race, following a miserable season on the RC213V plagued by injury and difficulties in adapting to the bike.

Speculation has been rife since that LCR's stand-in rider Johann Zarco - who was HRC's first choice for this year before it signed Lorenzo - and his team-mate Cal Crutchlow would be most likely to succeed the departing Spaniard.

But rumours soon began to circulate that reigning Moto2 champion Alex Marquez was also in the frame, despite already agreeing a year extension with Marc VDS in the intermediate class.

Although the agreement "is not yet closed," according to Autosport's sources with knowledge of the negotiations, the situation seems to indicate that the deal will be signed soon.

Both Honda and Marquez already openly contemplated the possibility of Alex - who at 23 is three years younger than the champion - becoming part of the MotoGP grid in 2020 in the Repsol-backed team.

"Of course, Alex's option will be valued. You have to consider him on his own merits, not his last name," commented Honda team manager Alberto Puig.

Marc has insisted whenever asked about it that he would not pressure Honda to sign his brother, having not pushed for that in the past despite having the possibility to do so. 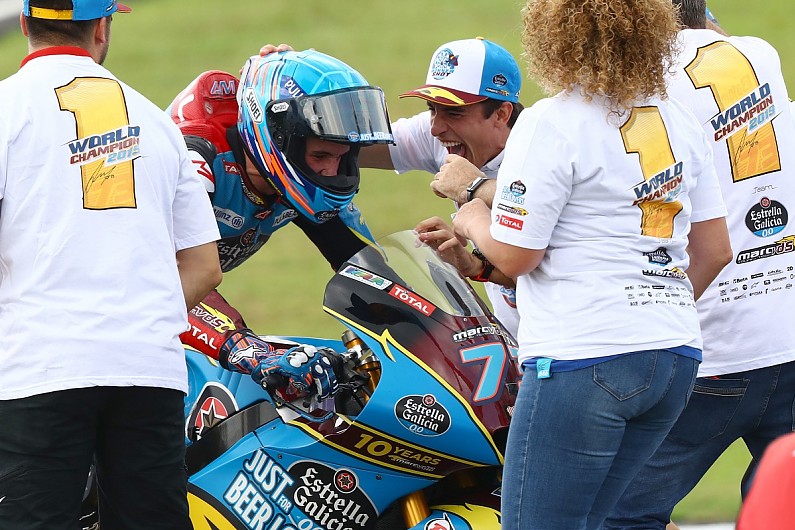 "I would lie if I said that I don't want my brother [as a team-mate], but I insist that I have never forced the situation and now I will not either," the elder Marquez brother said.

It is thought Alex will be placed on a one-year deal with Honda so the manufacturer remains aligned with the other factory teams on two-year rider contract cycles.

It is unclear yet if he would jump straight onto the Honda in Tuesday's post-race Valencia test if the deal is signed quickly.

Alex first rode the RC213V at that test in 2014 as a gift from HRC for winning that year's Moto3 title.

Alongside the Marquez situation, Zarco has now been linked with a shock switch to the Ducati fold and a 2020 seat at the Avintia team.

It is not yet clear who this will be in place of, as both Tito Rabat and Karel Abraham have contracts that extend into next year.