Redding joined the Paul Bird Motorsport Ducati BSB team this season after losing his place in the MotoGP field following a five-year stint in which he scored two podium finishes.

His title-winning campaign is set to be his only BSB season as he has already signed a deal to race for the Ducati works team in World Superbikes next year as Alvaro Bautista's replacement.

Redding bagged seven wins during the 2019 BSB 'regular season', but trailed team-mate Joshua Brookes in the title race after the points were reset ahead of the Assen round under the series' playoff-style 'showdown' format.

The PBM pair were joined in the showdown field by Thomas Bridewell, Danny Buchan, Tarran Mackenzie and Peter Hickman, with the six intended to fight it out for the title over the seven remaining races.

Redding won both races at Assen and completed a double at Donington too, arriving at Brands with a 28-point lead over Brookes. 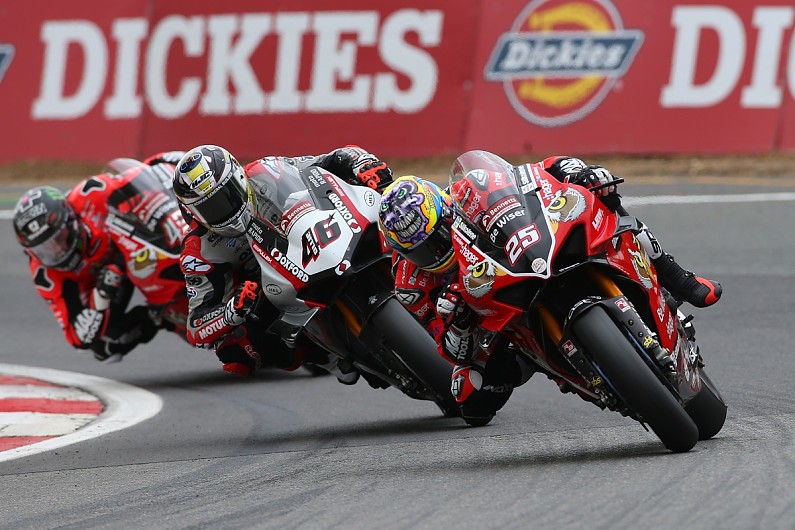 This was cut to 19 points when Brookes won the opening race of the weekend, although Redding recovered to third after a qualifying issue consigned him to ninth on the grid.

A crash for Luke Mossey that effectively split the field into two groups threatened his chances of challenging for the podium, but the race was then red-flagged for another crash and the restart provided Redding an opportunity to fight through the pack.

Brookes won again in race two but Redding minimised his losses by taking a close second, keeping a 14-point lead ahead of the final race of the season.

All Redding needed was a top five result and third place behind Brookes and Bridewell was sufficient to seal the crown despite Brookes's clean sweep of wins.