Just a few days after Miller's own MotoGP future was thrown into doubt due to the possibility of Ducati reuniting with Jorge Lorenzo for next year, KTM announced that Zarco would depart its works squad midway through what was supposed to be a two-year deal.

By that point Lorenzo had already decided to stick with Honda. Miller was thought to be very high on KTM's list of potential replacements for Zarco, but it was announced just two days later that the Australian rider would stay with Pramac.

Miller admitted he had been tempted by the prospect of a KTM reunion, having challenged for the Moto3 title with the Austrian manufacturer in 2014 (pictured below), but ultimately felt continuing with a factory-spec Desmosedici bike would be more beneficial for his career.

"For sure I had to think about it," Miller said. "KTM are a great manufacturer, I've had a lot of success in the past, and I have a great relationship with [bosses] Mr [Stefan] Pierer and Pit Beirer and these guys like that. I have a really good feeling with them. 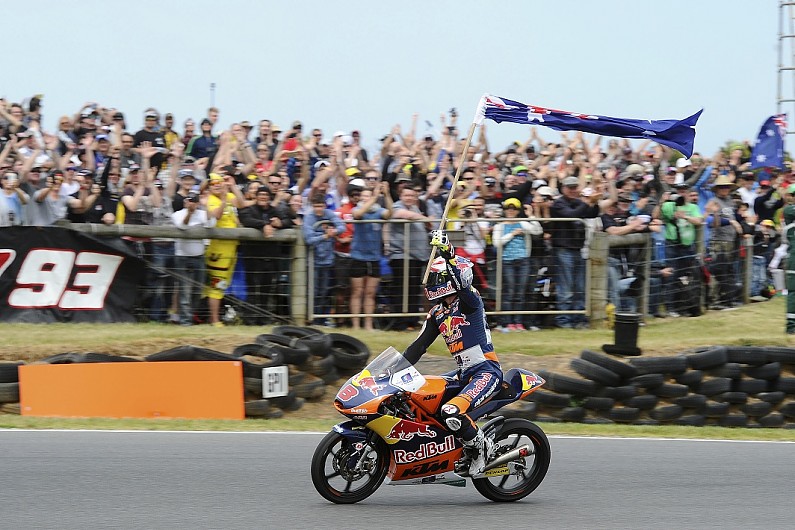 "So it was kind of tough to turn down in that way - but for me, to take a risk at this time of my career, when things are just kind of start getting on the track, let's say, getting some podiums and getting where I'd like to be...

"Seems like in my career I've always done that, just started going quite well and then challenged myself immediately again, thrown myself back under the bus.

"I'd like to spend some time out from under the bus and up inside a seat."

Miller said last time out at the Red Bull Ring that the realisation Lorenzo could take his ride "hit me like a ton of bricks" - but has now insisted he is happy to "sweep the shit under the rug and leave it there" in the aftermath of that situation.

Asked by Autosport whether he felt he had deserved better from Ducati, Miller said: " I think you can't really dwell on that sort of thing.

"I mean, he's a three-time MotoGP world champion. He's won on the [Ducati] bike already in the past. He's got a great, let's say, history.

"We have to look at the reality of the situation, where he is at in his career. And I feel I'm just starting to get going.

"But there's no need to dwell on it. I'm not butthurt or anything like that. I'm not losing sleep over it.

"That's the business - this paddock is full of decisions like that, day in, day out, so it doesn't bother me one bit."