Valentino Rossi says the factory MotoGP Yamaha he could only qualify 13th at Jerez and the Petronas versions Fabio Quartararo and Franco Morbidelli put on row one are "very similar".

Both the works M1s had to go through Q1 in Spanish Grand Prix qualifying after struggling in practice, and only Maverick Vinales made it into the pole shootout.

While he then qualified fifth, rookie Quartararo and Rossi protege Morbidelli put the new-for-2019 Petronas SRT squad's satellite bikes first and second on the grid in a shock qualifying result.

During the 2017 and '18 seasons, the works Yamahas were often outperformed by the older-specification Tech3 example of Johann Zarco.

Rossi said the Jerez qualifying outcome was not a repeat of Yamaha finding its previous generation bike worked better than a new model.

"From what I know, the bike of Quartararo is very similar [to the factory team]. It's not like Zarco's was," said Rossi.

"The four bikes are all very similar. I know that Franco is a little bit more factory, he has some more parts.

"But for Quartararo the engine, the chassis and everything is the same.

"He's arrived very well, and he is able to enter the corners very naturally.

"In that area I don't feel very comfortable. I improved compared to yesterday but I'm not fantastic and we need to work on that." 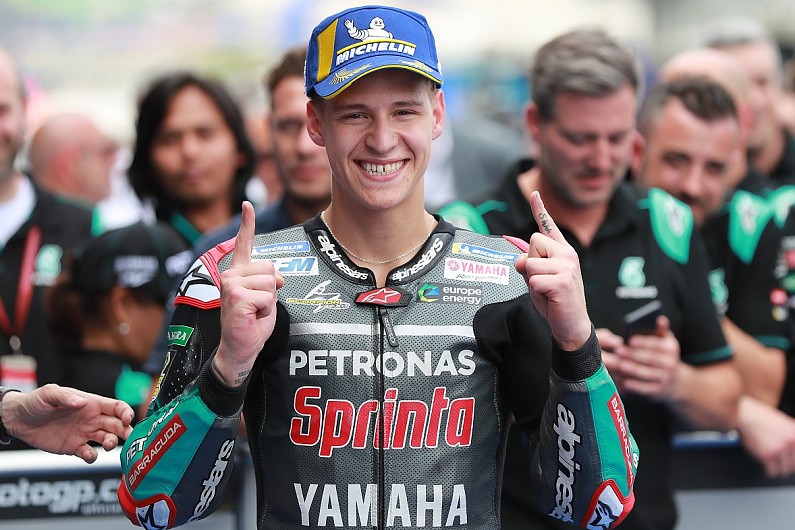 The seven-time MotoGP champion praised Petronas's two young riders for their own performance.

"I'm surprised that they are one-two for sure but not surprised about the level of Franco, who I know very well, but also Quartararo," he added.

"From the winter tests they were fast, they liked the bike and here at Jerez they were always strong in practice and today they made the masterpiece because they are first and second. So congratulations to them."

LCR Honda rider Cal Crutchlow, who also had a stint at Tech3 when it was Yamaha's satellite team, said he was "not going to say" why he thought the works team was being outperformed again, but also lauded Morbidelli and Quartararo.

"It's nice to see the satellite teams and riders able to challenge the factory guys.

"If you look at Fabio in his riding style, he's doing nothing. He's just riding the bike smoothly and doing the lap times, it's as simple as that.

Quartararo thanks team for its belief

Quartararo had been a surprise signing by SRT as his career had largely stagnated in Moto3 and Moto2 after he arrived in the grand prix paddock highly rated from back to back Spanish Moto3 titles in his teens.

The 20-year-old became MotoGP's youngest ever polesitter, taking the record from Marc Marquez, with his Jerez performance, and he thanked his team for taking a chance on him.

"It is a brand new team but the people inside have a lot of experience," said Quartararo.

"I want to thank them because last year was tough in the beginning and they believed in me for MotoGP.

The feeling is incredible for them and for me."

Yamaha transferred top engineers Wilco Zeelenberg and Ramon Forcada, who had been key parts of Jorge Lorenzo's three-time title-winning crew, from the factory team to SRT when the new squad was created this winter.

"The team deserves this kind of result because they work very well, and the team is made by great people," Morbidelli added.

"We feel great inside the team, I feel there is a lot of passion and energy around us and this is the demonstration."

Rossi had only been 18th and 14th in the two Friday practice sessions, but felt he had made progress with his bike overnight and was "unlucky" to go out in Q1 after hitting traffic.

Both he and Vinales are more confident in Yamaha's race pace and believe they will be competitive on longer runs.

"My pace is quite good. It looks like the first three are a little bit faster in the pace, especially [Marc] Marquez and the two factory Ducatis," said Rossi.

"But afterwards the pace of the rest is similar - today. But tomorrow is another day."