Xavier Artigas claimed his maiden Moto3 win in a dramatic conclusion to the season at the Valencia Grand Prix, as champion Pedro Acosta was taken out on the last lap.

Having claimed the first pole of his title-winning season on Saturday, Acosta grabbed the holeshot off the line to lead Aspar’s Izan Guevara and Tatsuki Suzuki on the SIC58 Honda.

MotoGP-bound Darryn Binder’s final Moto3 race ended at Turn 4 when he highsided out of the corner, with Ryusei Yamanaka crashing out in avoidance of the Petronas Sprinta rider, while the sister SIC58 bike of Lorenzo Fellon also fell in his own accident.

On the following lap Acosta was lucky to stay mounted when he made an error at the Turn 3 left-hander, ceding the lead to Suzuki and second to Filip Salac on the remaining Prustel GP KTM.

Guevara would blast past the pair of them on the run to Turn 1 on the third lap, which would become a common theme over the next few laps – with the Aspar GasGas rider then engaging over first place with world champion Acosta.

In typical Moto3 fashion, the lead changed on numerous occasions across the 23 laps, with the likes of Acosta, Guevara, his team-mate Sergio Garcia, Jaume Masia on the second Ajo KTM, Leopard’s Artigas and Tech3’s Deniz Oncu all taking shots leading the field.

Oncu is returning from a two-race ban for causing the dramatic Austin incident last month, but his podium charge was made harder when he was forced to take a long lap penalty for exceeding track limits on lap 16.

He served this expertly though – along with Salac – to remain in the lead group.

The action remained frantic at the front of the pack, with 2021 runner-up Dennis Foggia – as he has done so often this year – making a late charge to the lead on lap 20 of 23. 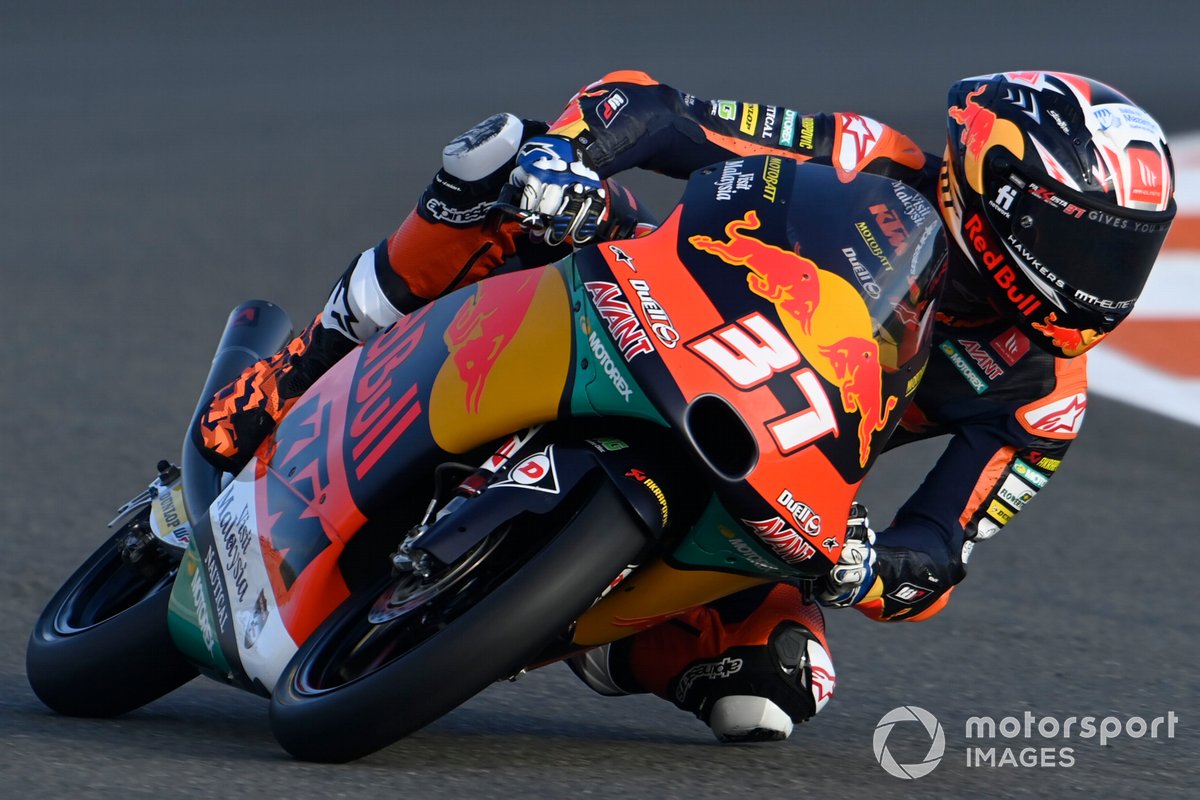 Acosta quickly retaliated into the Turn 8 left-hander, but was powerless to stop both Foggia and Leopard Honda team-mate Artigas coming through at Turn 1 at the start of the penultimate lap.

Acosta then retook second from Artigas into Turn 2, and attempted a lunge on Foggia into Turn 8 – though had the door shut in his face.

The Ajo rider made another raid on Foggia into the last corner and got the move done at Turn 1 on the final lap.

But his final Moto3 race before his Moto2 graduation next year ended at Turn 2 when Foggia made contact with him, taking Acosta out of the race.

Garcia found himself in the lead through this chaos, but Artigas snatched the position away from him at the last corner and held on to take his first win ahead of the Aspar rider.

Masia completed the podium having come from 21st on the grid, with Salac beating Oncu and Foggia.

Stefano Nepa was seventh on his BOE Owlride KTM from Guevara and Avintia duo Carlos Tatay and Niccolo Antonelli.

Foggia was later handed a three-second penalty for the Acosta clash, dropping him from sixth to 13th and pushing Tech3's Ayumu Sasaki up to 10th as a result.