Rookie Moto3 world champion Pedro Acosta says his title win in 2021 was down to Aki Ajo and KTM “not giving me a team, [but] giving me a family”.

The 17-year-old Spaniard was due to compete in Moto3 in 2021 with the Prustel GP team, but that deal fell through and he was left without a ride.

Ajo Motorsport and KTM stepped in to get him on one of the Finn’s Red Bull-backed bikes, with Acosta stunning the grand prix paddock in the opening two rounds when he finished second on his debut in the Qatar GP and won from pitlane in the Doha GP.

Acosta went on to win five more races – including Sunday’s title-deciding Algarve GP – but mixed form in the second half of the season, when he went from the Austrian GP to the Americas GP without a podium, allowed Leopard’s Dennis Foggia to close down his championship advantage.

After Foggia was controversially wiped out by MotoGP-bound Darryn Binder on the last lap of Sunday’s Algarve race, Acosta’s victory crowned him the first rookie world champion in the lightweight class since Loris Capirossi in 1990.

Speaking about his emotions having just won the title, Acosta said: “I feel incredible. I was crying all the last lap, and in the [TV] backdrop.

“But finally I was thinking what happened all last year, I lost the team and the opportunity I had to come here.

“And finally Aki and KTM and Red Bull didn’t give me a team, they gave me a family.

“I didn’t win this alone because without the team I’m nobody. Finally, these guys believe in me all the situations; when I crashed four times at Le Mans, when I was 25th [on the grid] in Silverstone, and in all the races.

“And they never lost the smile on the face. For this I think I don’t win this championship alone, we won this together.” 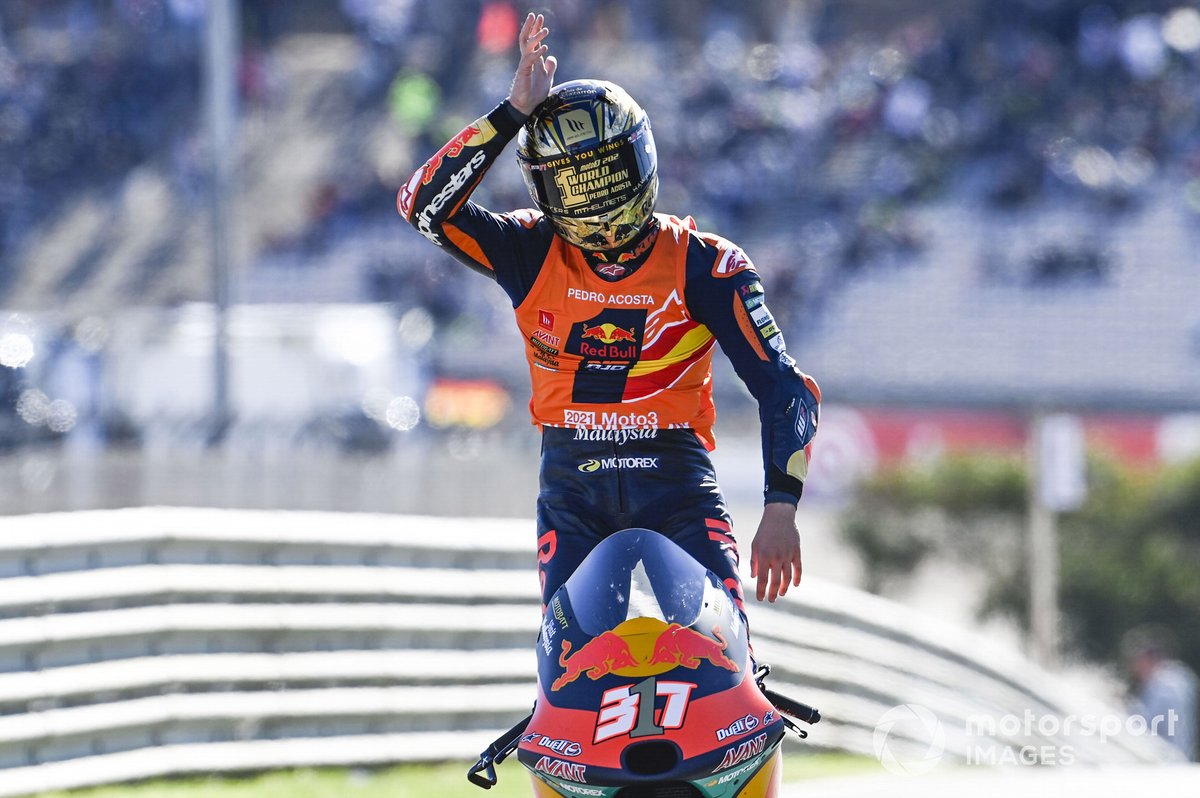 Turning 17 this year, Acosta has also grown by a few centimetres and admits this caused him some back pain in races in the second half of the year.

He says this only added to what was already a difficult year, but also believes “it’s the year I learned the most in my racing life”.

“[It] was difficult to beat him [Foggia], Misano wasn’t the best match ball to do it,” Acosta added.

“About the centimetres, I had pain again in the back finally.

“When you are there but in the end of the race you start to feel it, you don’t push and your brain doesn’t give that 10 percent more when you are fully comfortable.

“Finally, I’m not the best aerodynamically, and these two, three centimetres more didn’t help me a lot.

“I’m still 58 kilos and in some situations I am more like the others, but finally it was a hard season for everything.

“If I didn’t win I would learn from the others, I’m happy to have come to fight with these guys because I learned a lot. It’s the year I learned the most in my racing life.”